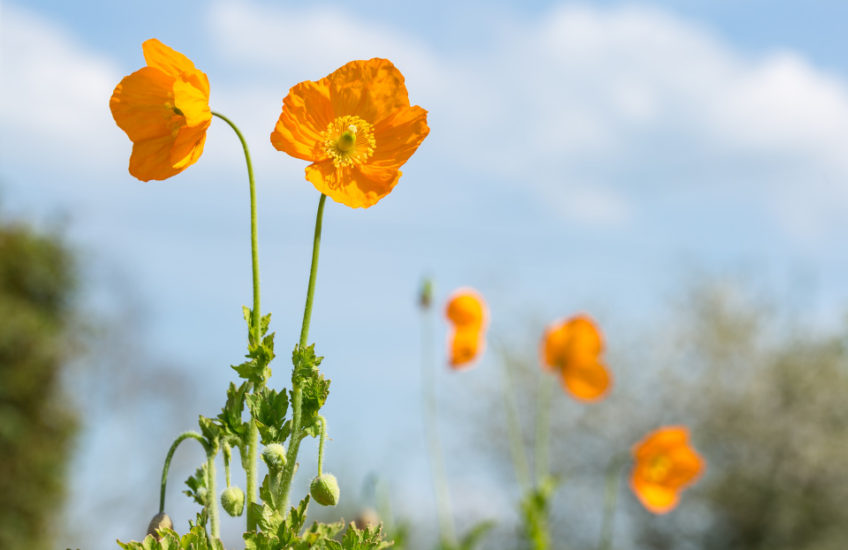 I’ve deliberately given myself a quieter day than yesterday – not least because of the heat, which was pretty fierce today – but I did prune a few shrubs so I could at least feel that I’d done something useful.

R (who after spending the morning working had spleen to vent) moved several barrow-loads of stone from the pear tree bed for me – the chap who owned the house before us seems to have had the idea of turning that bed into a rockery, but because he used small pieces of stone from old farm walls the result was more like a slag heap, and I’ve had to pull the stuff out a lump at a time as I’ve cleared and cleaned the soil for planting. R also ripped out a lot of cow-parsley, which has self-seeded all through the garden – after all of which his mood was positively beatific.

Luckily I had these pretty Icelandic poppies to fall back on – they have self-seeded in the top of the dividing wall between our garden and our neighbour’s, and were dancing rather prettily in the quite strong breeze that was blowing this afternoon. I photographed them yesterday, and the shot received a positive reaction in the AYWMC Facebook group, but today I noticed that more had opened and that I could get an angle which had sky as a backdrop rather than the neighbour’s back door. I find them rather cheerful and optimistic, and I hope you like them too.