I had various thoughts today about an image for Mono Monday: I could have blipped a family heirloom, though I think I’ve already done most of the photogenic ones; or an interesting gravestone, except that last Wednesday’s tomb would be a hard one to cap; and I even thought about taking a selfie, with a photo of my Dad as an extra, to illustrate the point made to me by one of his friends at his funeral, that “as long as you’re still around, he hasn’t completely left us.” But in the end I decided to go the heritage building route – except that where you might reasonably expect me to choose (as usual) a nice building from Stratford-upon-Avon, today R suggested that we should run our errands in Evesham so I could get my photo there.

The main image is  the Almonry Museum at Merstow Green, built in the C14th and once home to the Almoner of Evesham Abbey. The extra is of Evesham’s two Parish Churches: All Saints to the left and St Lawrence’s in the centre, with the bell tower of Evesham Abbey peeping over St. Lawrence’s shoulder on the right of shot. There is some information here about the Museum, and here about the churches, if you would like to know more. 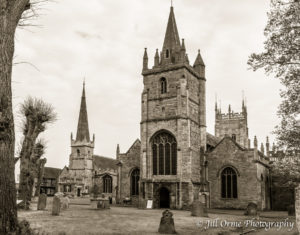