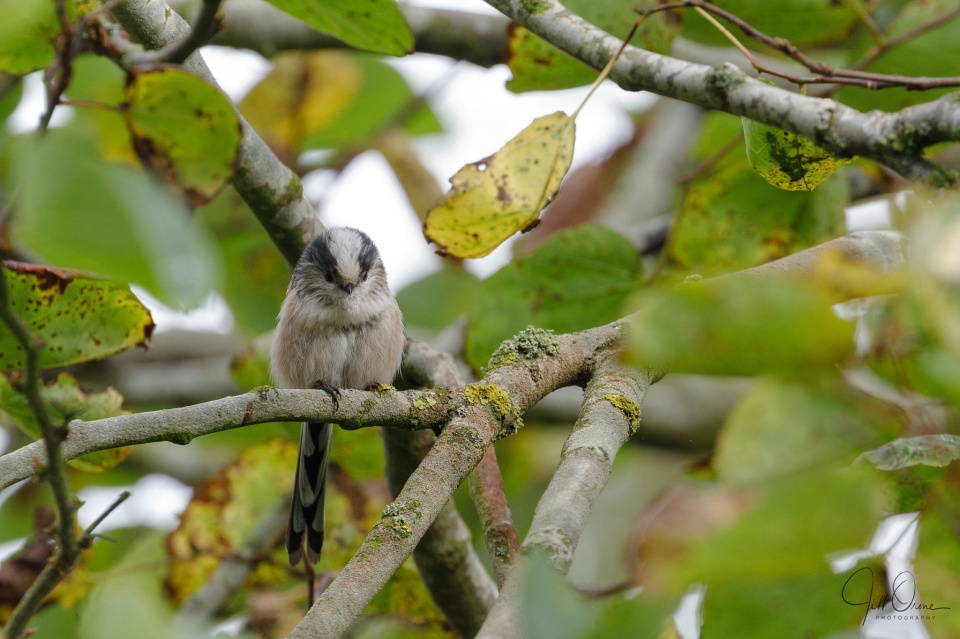 I had a bit of trouble deciding between this shot and one of a male pheasant coming into glorious new plumage; but in the end I’ve gone with this, partly because long-tailed tits are much harder to photograph than a pheasant, and partly because it’s soooo cute I just can’t resist it.

R and I went to Hillers for coffee this afternoon, and I wandered round to their bird hide in the hope of fallow deer, but only found some pheasants and a red-legged partridge. As I was leaving the hide I heard the high-pitched wittering of a gang of long-tailed tits that were flitting around the show garden looking for food; they’re very fast and restless, and by the time I had a lens on them most were already leaving this tree to try their luck at the next one, but I was lucky, and caught this tiny chap in a moment of contemplation.

When I say tiny: a LTT is about 15cm long (6 inches in old money), but two-thirds of that is tail. They live and travel in extended family groups, roosting together in a huddle at night to conserve body heat, and one of my books states that during the nesting season unpaired adults will even help to feed chicks within the group. This communal living strategy (coupled with a willingness to live in built-up areas, and to eat garden bird food as well as their preferred diet of insects and larvae) must be working for them, because the population is stable or even increasing in the UK. The biggest threat they face is cold during a hard winter, when their numbers can plummet, but they breed efficiently and recover quickly after disasters such as this.

I find them absolutely charming, and I love to photograph them whenever I have the chance.