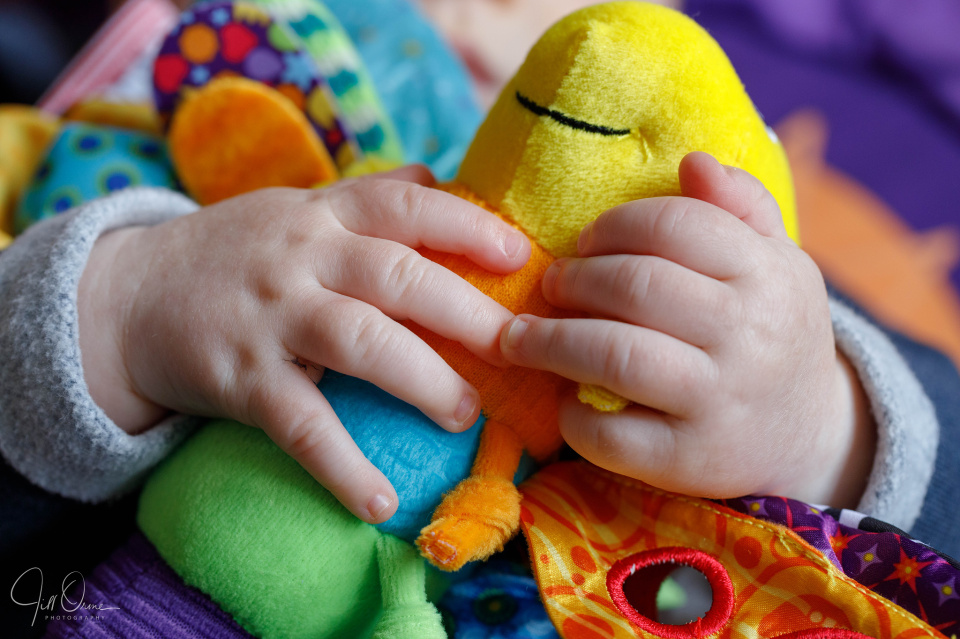 Another rollercaster day down in the Principality: there was engagement and frustration, there were chuckles and tears, there was bouncing around and then falling into an exhausted doze. And that was just me – Baby B had quite a busy day too.

He’s now really aware that his hands and feet belong to him and are under his control, and he’s working hard on improving his fine motor skills. After his repeated pulling on Barry the Butterfly had brought it down off the frame above the play mat, I put the toy on his tummy, and he immediately grabbed it and hugged it to his chest, before lifting it to his face and trying to eat it.

Later, R and I were bringing him home from his second nap-walk of the day, when he woke up and found that he couldn’t interact with us and watch the scenery go by as he usually does because he was underneath a very wet rain cover; so instead he began playing with his own fingers. At the moment when he managed, with a certain amount of squinting, to bring his hands together and touch his fore and second fingertips against each other, I found myself hopping down and squeaking with frustration because I couldn’t capture the moment through the rain hood – but I’m sure I’ll have other opportunities in the future to record him being a genius.

The door bouncer we gave him last week has now been fully mastered, by the way, and is a big success. He may have inherited his fat ankles from his maternal grandmother (poor child), but he’s going to have the thigh muscles of a champion gymnast pretty soon.