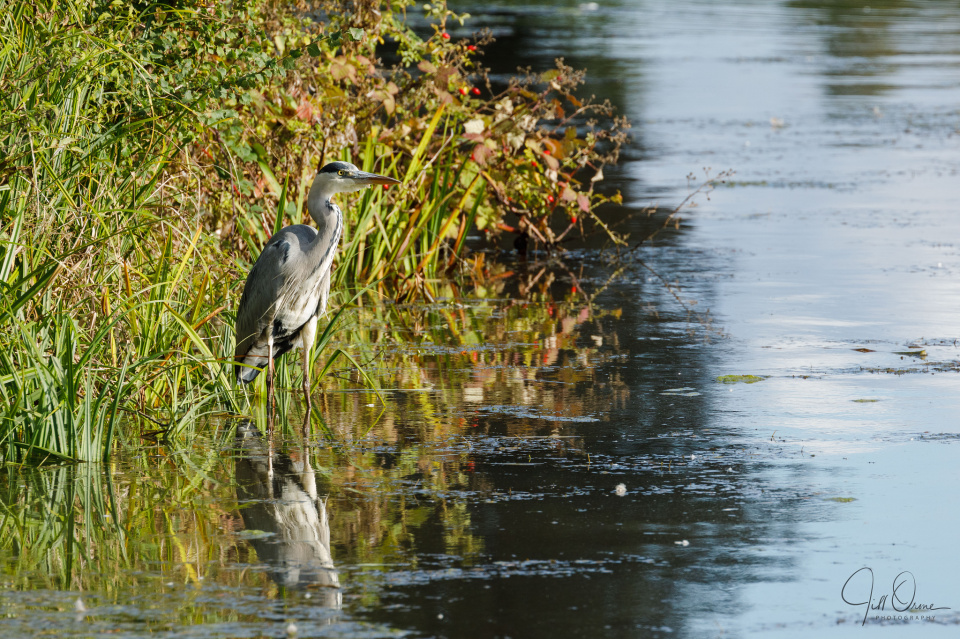 Flushed with success after finding a Migrant Hawker at Charlecote yesterday, I took myself off to Croome this afternoon to see if there were still any dragons about there. There were, but I should have gone in the morning: by the time I arrived, just after 2pm, the sun had sunk so low that most of the lake was in shadow, and dragon flight shots were out of the question. I managed to grab a couple of photos of a Common Darter and a Migrant Hawker when they perched momentarily, but completely failed with the Southern Hawker that sailed elegantly past me several times before disappearing into the shrubbery.

Given the difficulty the dragons were presenting, I was pleased when one of the resident herons turned up at the lake, and settled in some rather nice autumnal light at the edge of the small island. As I was walking along the bank, choosing my angles and snapping away at it, a voice behind me said, “She’ll be getting some good photographs with that big camera.” My immediate impulse was to turn round and explain that actually it isn’t quite that straightforward, but fortunately this was trumped by my desire not to engage in chat, so the speaker and his companion went on their way without having been put straight, and I carried on communing, silently, with the equally taciturn heron.

I’ve put a few images from my walk on Facebook, if you’d care to take a look. I think the small congregation of young birds in a spindly conifer might be tree pipits, but the little brown guys are tricky for the uncommitted birder to tell apart, so please don’t quote me on that.