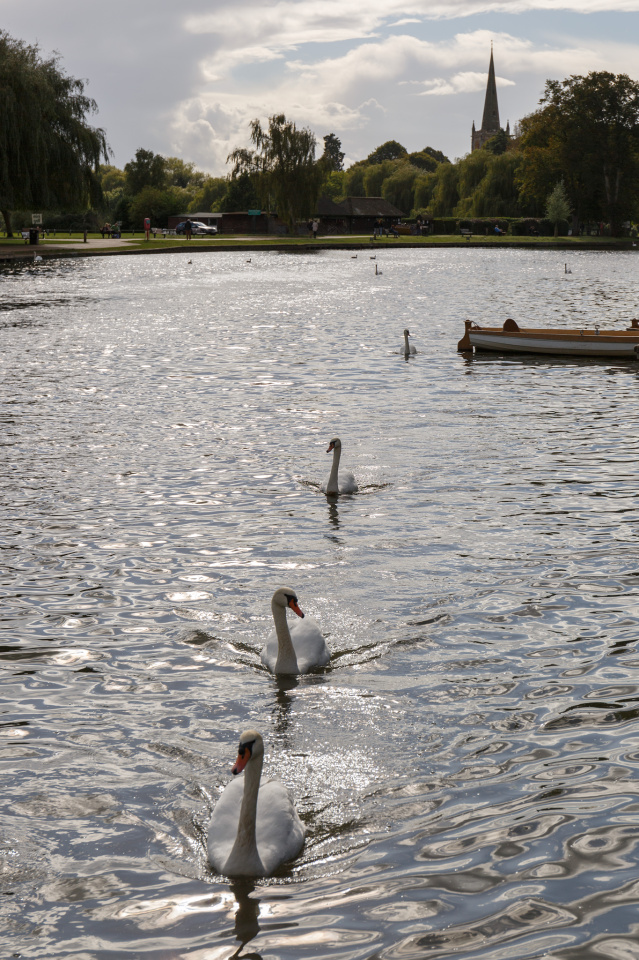 Yes, OK – it’s clipped. But wotchergonnadoo with light like this? Well, yes, I know – not shooting into it would have been a better idea, probably – but the swans were coming from that direction, and I liked their procession, which R said reminded him of planes coming in to land at Heathrow. I wouldn’t know about that because I can’t remember the last time I left the country, but I do like the apparently synchronised way they’re moving, and alternately looking to opposite sides.

2. I had lunch in Stratford with R.

3. I managed to get a competition entry in before the deadline, and the email hasn’t bounced yet.

2. A conversation with the passport office in which I enquired, really quite mildly, why they had rejected my application for the second time (the first having been because I failed to realise that by “Declaration” they didn’t mean merely the single sheet of paper which they ask you to sign and return to them which calls itself a Declaration, but also the entire pack of explanatory papers that arrives with that sheet, and therefore if you merely send back the signed sheet they send you a whole new pack and tell you to start from the beginning again and get it right this time), and having taken me through Data Protection and accessed the file, the woman I was speaking to said (in a voice like pouring cream) that…. she couldn’t tell me. At which point, working hard to prevent my own voice from sounding like fingernails being dragged down a galvanized bucket, I pointed out that all the information I was now being asked to fill in on a paper form was information which I had already put into the on line form, and she said that nevertheless, filling in the paper form and returning it by post was what they required me to do. I then pointed out, still relatively mildly, that dealing with them was a Kafka-esque nightmare, and suggested that she might like to pass on my feedback to whoever collates information about clients choking on their own bile; and she said that she would certainly do that, and was there anything else she could do for me? I managed to end the call at this point without letting myself down; but when R was treated to the story he said that I should have asked her to bang her head on her desk so we could enjoy the experience together. I’ve sent the form back, but I don’t expect I’ll ever get the passport.

3. The realisation, while I was out in Stratford with R and a friend messaged me to ask if I wanted to do lunch one day next week, that my phone is no longer syncing with Outlook, and hasn’t updated my calendar or contacts for several days. The sole reason that I have a Windows phone is that it supposedly works seamlessly with a Windows PC – which has never been properly true, but now it has stopped playing altogether. When we arrived home I searched the Microsoft forums and discovered that I was lucky it had taken so long for the problem to be rolled out to me – quite a lot of people hit this brick wall nine or ten months ago. The advice was to try asking Windows to repair Microsoft Live Mail; if you were lucky this would solve your problem, but if it didn’t you were… in trouble. I tried it. It didn’t work. I banged my head on my desk a bit more.

This evening I have mostly been calling into question the parentage of Microsoft and HM Passport Office. Tomorrow I’m off out in search of an iPhone.