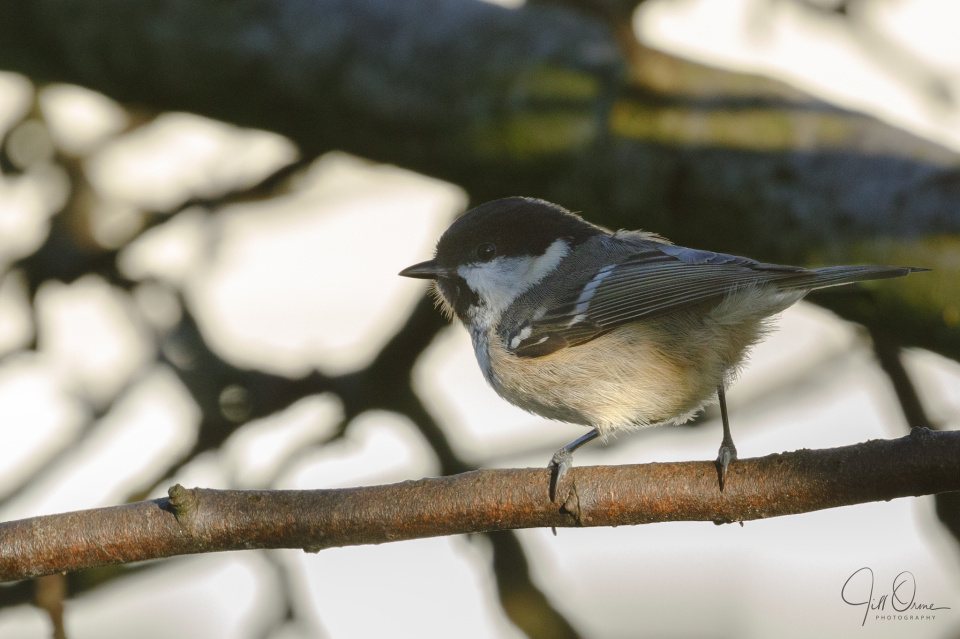 “Waahhh!!” I wailed at R, rushing into the kitchen at about three o’clock this afternoon. “I haven’t taken a photo yet! Waahhh! Where’s my camera? There’s a starling on the seed feeder! I don’t know where the big camera is! Waahhh!!!”

Camera tracked down to my study, I got the starling through the kitchen window – on a feeder, yes, but iridescing beautifully in the late afternoon sunshine. But then I thought that I should go out to get some fresh air and see what else I could find, so I crunched and squelched around the part-frozen and part-flooded garden, and after snapping some promising buds and catkins eventually found myself back at the apple tree nearest the house, watching small garden birds.

Although I’d placed myself with the sun at my back, this little coal tit settled in a position that required me to move around and shoot towards the light – not something I generally do from choice, and knowing that in its raw state it was both over- and under-exposed, I mentally wrote off this image as a record shot. Processing it tonight though, I found that imperfect as it is, I rather like it; and it’s unusual enough for a coal tit to allow you as close as this, that it’s turned out to be my photo of the day.

Taking exercise around the village with R at four o’clock, I discovered that the light was still lovely and lots of birds were out and about in it, including some winter thrushes. “Waahhh! Look – redwings! And me without a camera! Waahhh!!!”