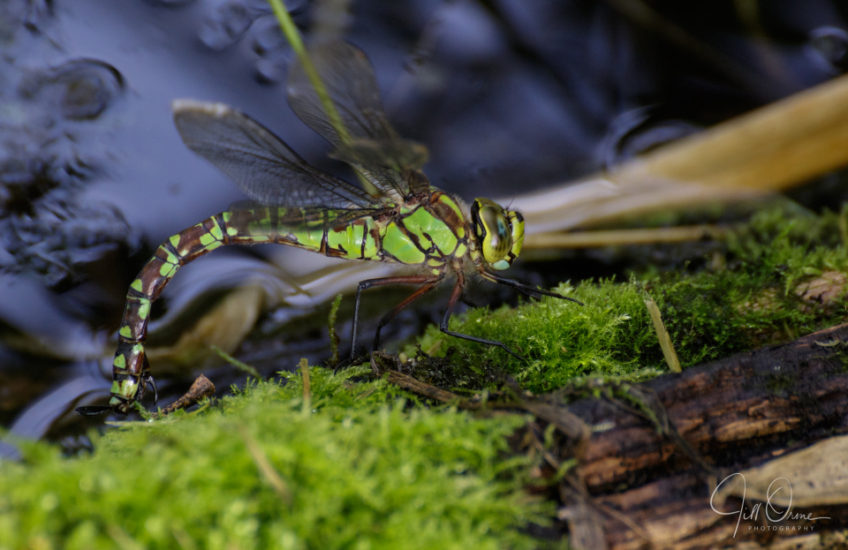 The rain that began yesterday afternoon carried on through till late morning today, and then it gradually dried up. By early afternoon the cloud had thinned enough for the sun to appear every now and then, and on an impulse I took a long lens and went down the village to the pond I’ve been invited to visit to photograph dragonflies. It was still pretty chilly, and I thought it was a long shot that the dragons would be out and about – and in fact I stood there (rather self-consciously, because the land is right next to the village street, and I was attracting curious looks from passers-by who know that I don’t own it) for several minutes without seeing anything other than some bumblebees and a wasp. I was beginning to think about giving up, when suddenly there was a clatter of wings, and in zoomed this beautiful female Southern Hawker. She flew a couple of quick hunting circuits, and then landed on a rotting log at the edge of the pond and began to oviposit.

I assumed that the egg-laying would be a relatively quick process, but it wasn’t; if I’d been able to foresee that I’d be watching her for over an hour, I’d have taken a few minutes out and nipped back home for my macro, which is a better lens – as it was, I was so close to her that I had to keep moving backwards to get her in focus with the long zoom. She painstakingly moved all over the log, probing it with her abdomen in the same way that an elephant uses its trunk to explore things, and injecting her eggs in places she found to be suitable. I have prettier shots of her than this, but I’ve chosen to post this image because it’s one of only a couple I took which shows her scythe-shaped ovipositor, as she was in the process of rapidly moving it from one site to another.

If you have fifteen minutes to spare, I highly recommend this video, which covers the entire life cycle of the dragonfly. I doubt that it will make you find them cuddly, but I’d be very surprised if it doesn’t impress you: though ruthless hunters they’re fascinating creatures, and to many people (including me) absolutely addictive.

The circle of life almost closed prematurely for this particular hawker today, when one of the cats belonging to the people who own the pond came to find out what I was up to, and noticed a potential plaything within striking distance of dry land. I found myself guarding the dragonfly for the rest of the time she was ovipositing, and at one point Bagheera and I had a discussion about the situation which ended with me getting spat at and bitten. I can’t say that the hawker looked grateful for – or even slightly interested in – my intervention, but the fact that she lived to fly another day was a fair reward.