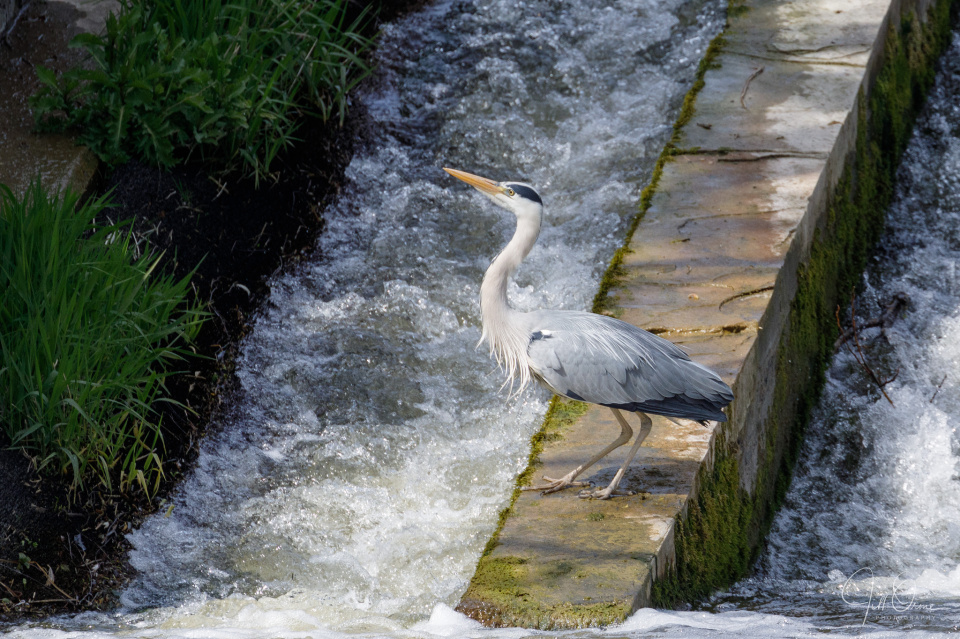 H and S set off northwards this morning, and R and I found ourselves feeling a little sad and deflated after the excitement of the weekend, so we went off to Stratford for a walk along the river and a coffee in the park. Where we discovered that the bench we’d chosen was about ten metres away from where H and S were sitting on the grass, chatting with H’s first jazz guitar teacher. We were slightly embarrassed – as if we’d been caught following them – but it was also quite amusing.

I took this photo as we were walking into town along the south side of the Avon. It’s not unusual for there to be a grey heron at the weir, but today there were two there, which neither of us had ever seen before. I haven’t been able to get an expert opinion on the question as yet, but I’m wondering if this might be a youngster: it was shaggier than the other bird, and seemed smaller, and it was definitely (as R put it) ditzier, in that it couldn’t seem to decide where best to stand, or how to go about catching anything even when it did choose a spot. We first saw it take off from the east side of the weir and fly over to the top of the wall on the west side; then it wandered about for a while and peered down over the edge into the water, before taking off again and landing on this groyne. After a few seconds of uncertainty it turned around, calculated the elevation – as you see here – and flew back up to the top of the wall; and finally it wandered away over the river bank and disappeared from view. I’ve chosen this image for my blip because of the composition and lighting, but I’ve included three others in a Twitter post, if you’d care to take a look.