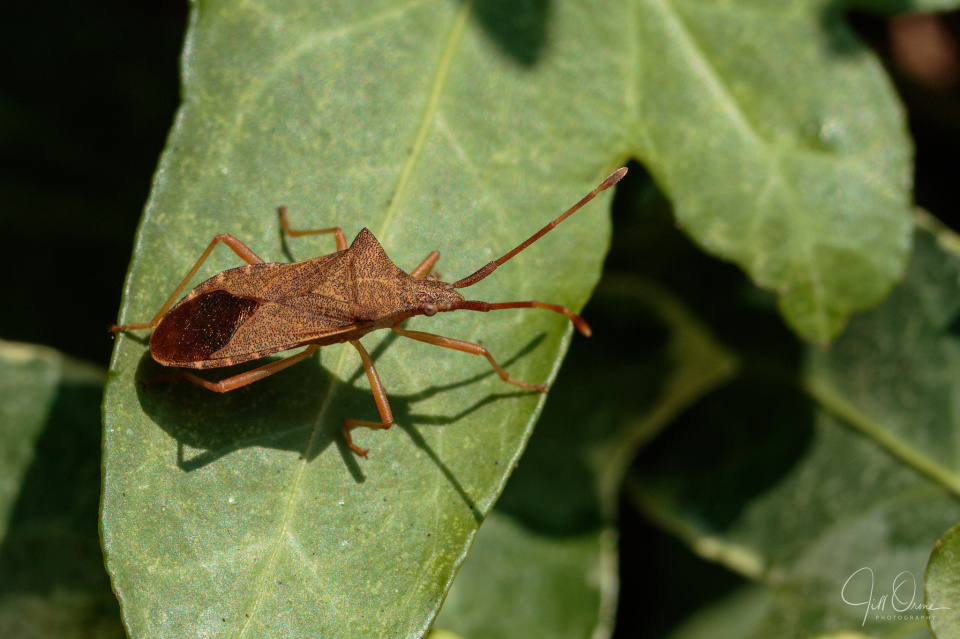 Today for me was mostly about the music – a long final rehearsal with orchestra and soloists this afternoon, and then our concert this evening. I did find the time this morning to go on a garden safari, and was pleased to spot this shield bug on the ivy that covers our yard wall. The bug was rather less pleased to spot me, but I managed to photograph it without putting it to flight.

When I saw it I thought this was a dock bug; but there’s a very similar species called a box bug, and they’re not all that easy to tell apart. Dock bugs have a pair of small projections called antenniferous tubercles between their antennae, and I found another shot that I thought showed these – so I originally plumped for dock bug. However, I’ve now been told that it is in fact a box bug – which is very interesting, because historically these were extremely rare, found in the UK only on Box Hill in Surrey, where the larvae fed on box tree leaves. In recent years though, they’ve adapted to exploit other foodplants, and have begun to expand their range – but it’s surprising to me that they’ve already reached the Shire. This one will have hibernated through the winter, and will now be looking to mate. Eggs are laid on larval foodplants such as hawthorn, buckthorn, yew and plum (I have both hawthorn and plum, but also a cherry and a crab apple tree very close to this spot, and I’ll be watching to see if their leaves are being attacked); the nymphs go through five instar stages – changing quite dramatically in appearance with each moult – and attain adulthood in the autumn.

Our concert of Baroque Te Deums this evening was great fun for the performers, and the audience seemed to enjoy it a lot. It was especially nice to sing with five young soloists, four of whom are still studying at Huddersfield University – I’ll be watching out for them to become well-known over the next few years, because they’re very talented singers. The second altos were helped in our pitching and timekeeping by having a timpanist and quartet of trumpeters right next to us; I’m sure that my ears will have stopped ringing by about the middle of next week!