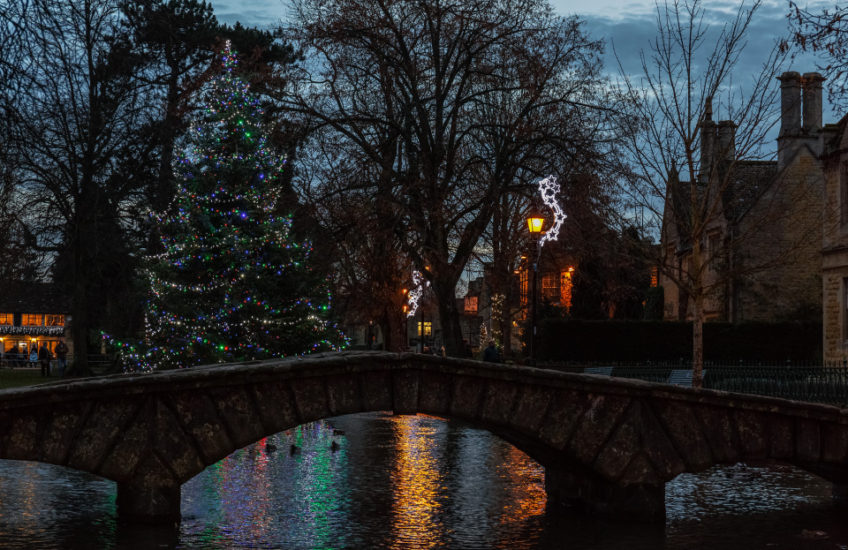 I had an extremely exciting few minutes this morning, which I’ll tell you about, if you’re sitting comfortably.

Having seen some recent photos of the Christmas decorations in Bourton, I’d decided that I would zoom over there this afternoon; so I spent the morning doing useful paper-pushing and domestic engineering before going out. I was wandering happily round the house doing the weekly on-line supermarket order when, having checked the prosecco stocks in the wine rack under the stairs, I stepped backwards so as to be able to straighten up, and put my left foot down in thin air.

Falling backwards and to my left, I just had time to register that going sideways down the stone steps of the tower, at the bottom of which is a (closed) French door, was likely to be both painful and damaging, when very luckily my backward trajectory was interrupted by my sacrum hitting the tower wall – with a force which left a perfect imprint on the paint of the detailing on the back of my jeans, and I suspect may also have imprinted the outline of a 24-70 lens cap on my ample posterior padding. R, who was standing in the hall talking to me at the time, let out a shout of horror as I tipped over, and rushed to see if I was OK. Which I was, but the shock of what-might-have-been-and-almost-was turned my knees to water, and I found myself sitting on the stone steps letting out trembly giggling breaths for several minutes.

In the hours since, all manner of bits of my anatomy have started to hurt, suggesting that in the stress of the moment I forgot the necessity of falling gracefully, and tensed myself damagingly in anticipation of the impact. Though to be fair, the last time I fell badly I went backwards off a ladder and fractured a vertebra – thinking about the pain of which can still induce slight nausea – so it’s not exactly surprising that the split second today in which I was airborne and thinking “OH F***!!!” wasn’t exactly a relaxed interlude.

Anyhoo, once I’d calmed down and had a nice cup of tea there didn’t seem any reason not to go to Bourton, so I went. And as you can see, it was highly picturesque: water, bridges, ducks and a Christmas tree – what’s not to love? It’s a village I’ve avoided for a long time on account of its hoards of tourists – and even in the depths of December there were plenty of them around, though the numerous coach bays in the car park were blissfully empty – but there are plenty of things to see and photograph, and I think I should man up and go there more often (though probably not between June and September!).

The river, by the way, is called the Windrush. There are more photos here, and more information about the village here.