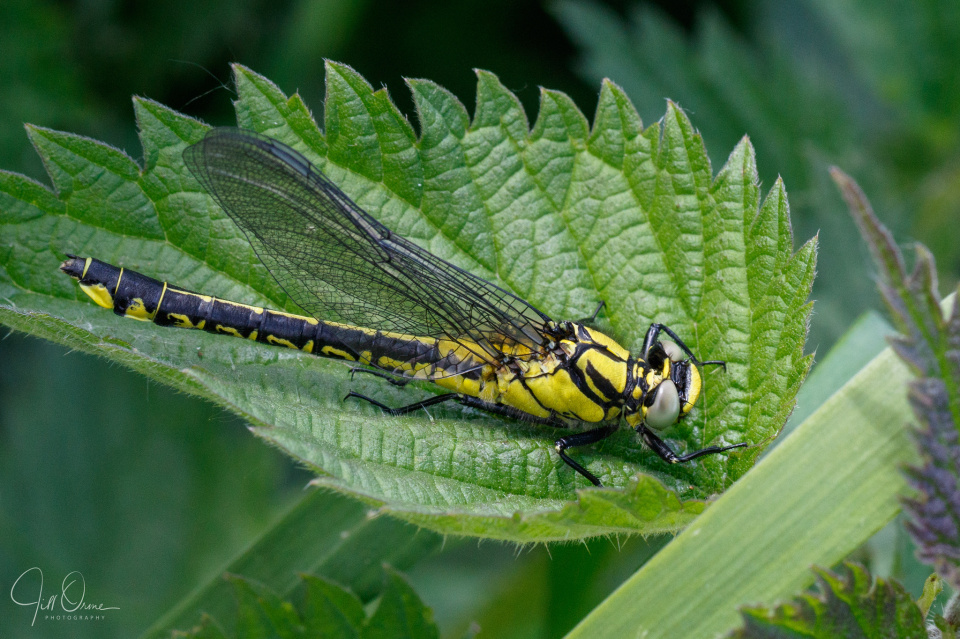 When blipfoto warned me a few days ago that this would be my seven-year blipversary, I mentally logged the fact and decided to try to find seven of something for today’s post. And then, being me, promptly forgot about it again, and only remembered after I arrived back home this afternoon. Nonetheless, this is a celebratory image of a kind: today’s encounter was the first time I’ve ever seen a Common Clubtail in the flesh, and this is therefore a “first” for my journal. This creature also serves to represent my photographic journey over the past seven years, from a generalist who’d happily turn a lens to anything, to someone who describes herself as a nature photographer, and considers any day that doesn’t include some interaction with the natural world to be a day wasted. And an Odonutter, of course: I can’t remember at what point in these past seven years I fell under the spell of dragons and damsels – though I could probably pinpoint it if I had the time to check back through my journal – but I am now, unquestionably, completely, incurably…. obsessed. There are (I tell myself) worse things one could be.

Anyway, the Common Clubtail – a rather odd-looking creature, I think (and certainly a whole lot less gorgeous than the fresh female Banded Demoiselle I’ve posted as an extra); though this one – which I think is a female, based largely on fact that she’s a bit broad in the beam – is absolutely fresh, so she may improve with age. (It’s not unknown, though I’m still waiting.) It won’t have escaped your eagle eyes that she’s holding her wings folded, which would be highly unusual for a mature dragonfly, but I’m told that it’s quite normal at this stage; she’ll have climbed out of the river and emerged from her larval case just a couple of hours before I spotted her resting on the bankside nettles. When she grew tired of my attention she fluttered away to a different perch (where I didn’t pursue her), and I could see that her wings were still soft and reflective. Later this afternoon, once they were strong enough, she’ll have flown away inland, looking for a wooded area in which to rest and hunt for the next week or so, after which she’ll either return to the Severn or find another suitable stretch of water, and look for a mate. 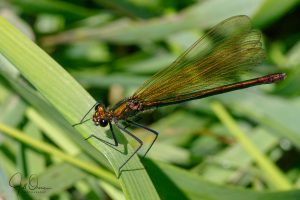 Despite its name, the Common Clubtail is far from common in the UK, though it can occur in good numbers in its strongholds, such as the Dee, the Severn, the Wye, the Arun, and stretches of the Thames and possibly the Avon (though there’s been concern over the Avon population in the past couple of years). It prefers slow-flowing, silty rivers, but also turns up at lakes and ponds nearby; last year, for instance, it was found at the “river” at Croome. I was told a few years ago that you only ever see the Common Clubtail on emergence, because it then spends the rest of its life high up in the trees – so if you don’t catch it when it’s fresh like this, you’ve missed your chance for the year. It took me a while to wonder how, if this were true, it ever gets to breed and oviposit, and having read up on the species I now know that it isn’t true: having dispersed quite a long way from their point of emergence, many of this years Clubtails will come back to Ripple once they’re mature, and it should be possible to see them again in their fully adult colours. By that time they’ll be strong and fast though, with breeding on their minds, and it may not be nearly as easy to get to within macro distance of one as I found it with this young female today.

So. Another 365 completed. I should probably stop – or at least go part-time – but somehow I doubt I will. Not yet awhile, anyway. If you’re one of the kind souls who reads my drivel, thank you: I’m well aware that since wildlife took over my life I’m a very poor blipmate, but that makes me appreciate the generosity of others all the more.