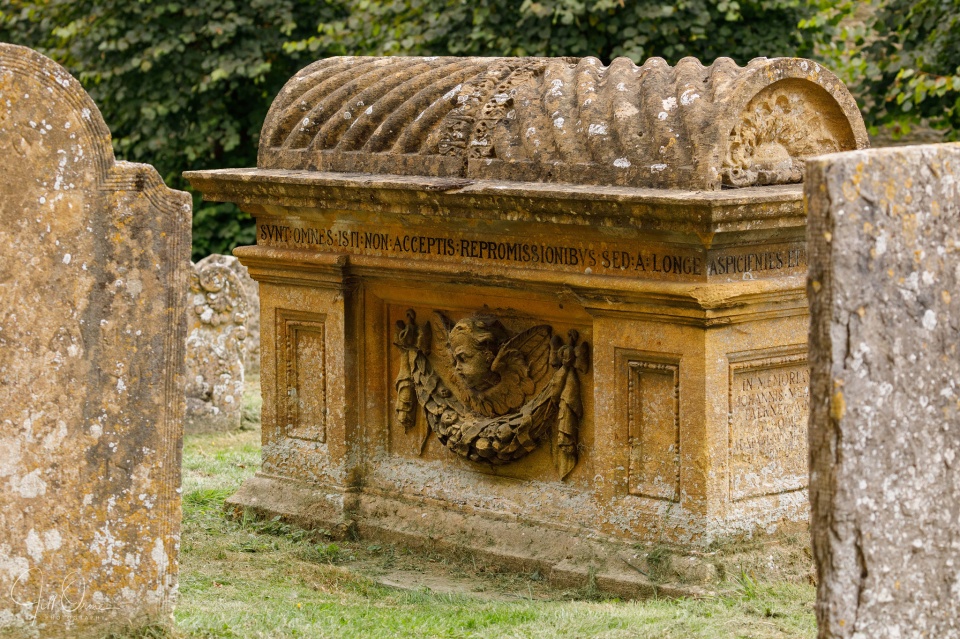 R and I drove over to Witney in Oxfordshire today, to meet Child One at the wedding emporium where The Dress has now arrived. Which is to say that I met her, admired The Dress all over again, complimented her on how lovely she looks in it, and discussed such important matters as shoes and hair ornaments, while R sat peacefully in a coffee shop “because this is mother-daughter” stuff. Apparently. We then had lunch, with R, to build our strength back up after the enervating business of paying for The Dress.

On the homeward trip I was fidgeting about photos, so R stopped in Burford, where we had tea, narrowly avoided buying me a necklace that would have cost nearly as much as The Dress, and then strolled down to the Parish Church to see if it was blippable.

I really must get myself organized: I have a terrifically useful book called England’s Thousand Best Churches (by Simon Jenkins), but I generally only remember to look in it for references to a particular church after I’ve been there. Had I looked up Burford St John this morning, we’d have been much better prepared to walk round it, and I wouldn’t now be grinding my teeth about all the things we missed (including another cadaver tomb). Sigh.

What we did notice was a concentration of chest tombs in the church yard, many of them having an unusual curved top which neither of us had ever seen before. A little research after we got home has told me that these are called bale-tombs, and that they’re quite specific to the wool churches of the Cotswolds. In the Middle Ages the Cotswolds became very rich on the wool trade, and quite a few of the market towns of Gloucestershire and Oxfordshire had their parish churches rebuilt or greatly extended via donations made by the wealthy wool merchants; in Burford the original C12th church expanded sideways and upwards every time someone felt like adding to it, and by the C16th it contained nine altars and had six full-time priests.

Bale-tombs are known to be linked to the wool trade in some way, though the exact meaning of the curved top is disputed: some sources say that it represents a bale of wool, but others claim that the diagonal banding you see here doesn’t resemble the binding of a bale so much as the creased cloth of a woollen shroud, and that what you’re seeing is a stylized representation of of the tomb’s shrouded incumbent. The latter theory is strengthened by the fact that quite often these tops have a skull carved on one of the ends – and possibly also by the knowledge that Acts of Parliament in 1666, 1678 and 1680, designed to protect the domestic wool trade against cheaper imported foreign cloth, made it compulsory for corpses to be buried in a woollen shroud rather than in imported hemp, linen, or silk (unless the deceased was too poor for a woollen shroud, in which case they were buried naked and didn’t get a tomb like this). But the truth is that the meaning is lost to time, and no-one today really knows.

According to England’s Thousand Best Churches the bale-tombs at Burford are “almost as good as those at Painswick” – which of course makes me want to rush off to take a look at those. But the one I’ve chosen to feature here, simply because R and I both like this photo, isn’t actually all that old. It’s good enough to be Grade II listed, but it’s described by Historic England as a convincing replica, having been carved for the burial of William Richardson Faulkner in 1903. Again, had I looked more carefully at the time, I’d probably have worked this out for myself – partly because of the inscription, but also because the decoration is in such good condition: golden Cotswold limestone is soft and porous, and doesn’t resist weather very well. The older bale-tombs at Burford are much more weather-beaten, as you’ll see if you’d care to take a look at my Facebook post. The one that’s presumably regarded as the finest of all, given that its listing is Grade II*, is the badly weathered tomb of Robert Aston, an innkeeper who died in 1798; the north face, shown in this photo and the one following, is especially badly worn, and the putto in the centre pillar looks more like a depressed elderly pawnbroker than a cherub.