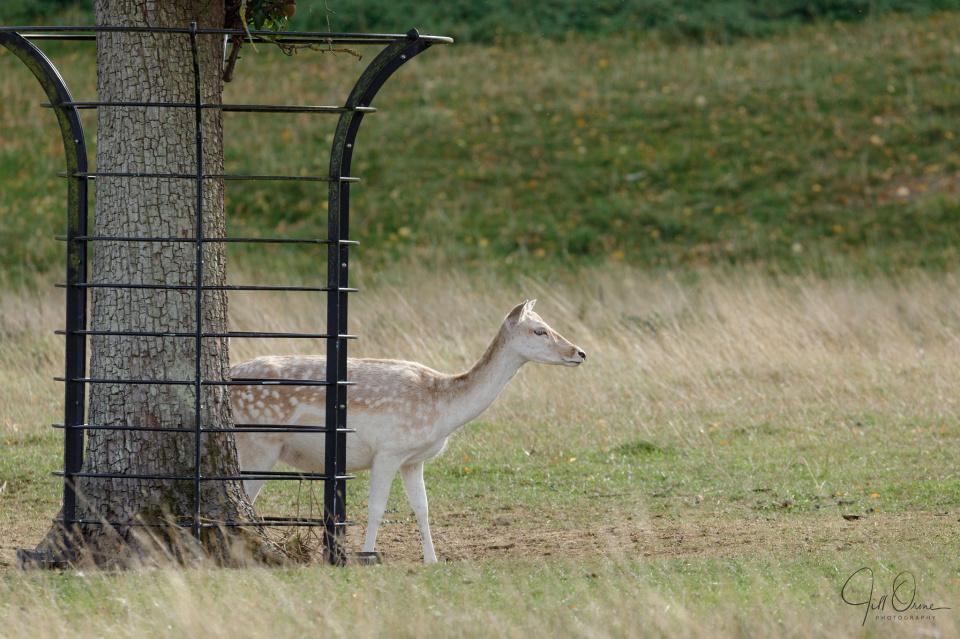 I nearly went with Fretful Fallow Friday because she does look slightly anxious – but decided that it would be pushing the alliteration. We are not The Sun, after all.

I was back in Stratford this morning, stewarding the camera club’s photo exhibition alongside one of the Committee stalwarts. We spent most of the morning reading, he on his laptop and me on my phone, but did have a few flurries of activity, during one of which I had a new and entirely unexpected experience: someone asked if they could buy a print of one of my photos. To say that I was nonplussed would be an understatement – I own neither a photo printer nor a mount cutter, and I’m therefore going to have to do some leg-work even to get my potential customer a quote – but it was very gratifying.

After meeting up with R at lunchtime for coffee and cake, I went off to Charlecote in search of photos. I remembered earlier this week that I’d been intending to get back there in time to see the fallow bucks shedding the velvet from their antlers, but I feared that by now I would be too late, and I was right: all the boys are looking bony and ready for the rut, which should start in around a month. As usual out of the mating season the males and females were hanging out in separate herds at opposite ends of the estate, though I was surprised to see a handful of mature bucks lazing around with the does and fawns – my first thought was that they might be old boys who’ve given up on all the rutting nonsense, but from a distance they didn’t look especially beaten up, so I’m not sure what was going on. Next time I visit it will be interesting to see if they’re still hanging out with the girls.

This elegant doe was one of a small group that were grazing near the river, apart from the main female herd and closer to the male herd. They were all edgy and skittish, which isn’t unusual at this time of year; but I think they were fairly safe from assault: the park at Charlecote gives the impression of being quite open, but there are strategically placed fences, and although I’ve seen bucks swim the river, I don’t think they could have moved from where they were today to this point without swimming the main lake and crossing the drive first. If the bucks that were hanging out in the female herd went to that much trouble to get there, I wonder if their intentions can be strictly honourable…?