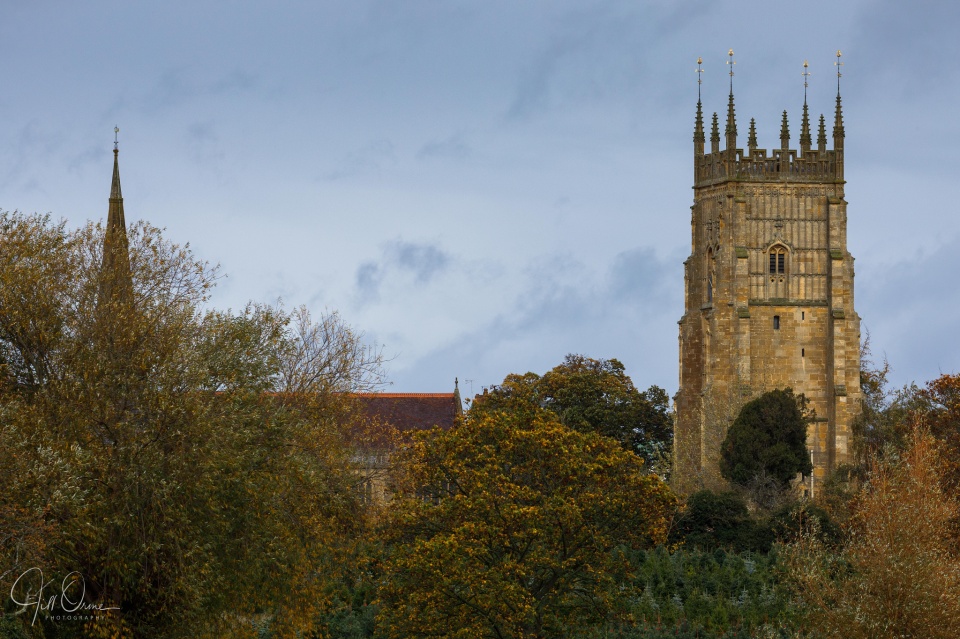 It wasn’t the best day for being out and about, being blustery and rainy, but I’m trying to keep moving – for the sake of my mental wellbeing as much as my physical health – so when R went to Evesham this afternoon to pick up some wine I tagged along, and we went for a walk and a coffee. I couldn’t actually remember the last time I’d been in The Sham, but my blip journal tells me that it was on 30th January this year; sadly the mandarin has moved on in my absence, but otherwise the town doesn’t seem to have changed much. I keep hoping that it will improve, or at least grow on me, but after living in the area for over a quarter of a century I’m beginning to fear that it might not.

It does have a few attractions though, one of which is the Abbey bell tower, captured here from back at the river as we walked along from Crown Meadow towards Abbey Park. The bell tower is the only extant bit of Evesham Abbey, which was demolished after the Dissolution of the Monasteries in 1539-40. I’ve always wondered why the Powers That Be left it standing, especially given that it was newly built at the time of the suppression, and must have been a dramatic sight and a real focal point within the town. Whatever the reasoning, it was retained by the Crown, along with all the bells and the lead from the Abbey roofs, while a local bigwig bought the rest of the site and the properties it contained. Fifteen years after the dissolution and demolition of the Abbey, Henry VIII’s elder daughter Mary Tudor gave back the bell tower and the largest bell to the town, presumably as a symbol of her revival of the Old Religion.

The roof line and spire you can see to the left of the bell tower in this photo belong to All Saints’ Church, one of Evesham’s two parish churches (the other being St Lawrence’s), both of which stand on the Abbey site, and both of which date to around the C12th or C13th. All Saints’ remains in use, while St Lawrence’s is now redundant. If you’re interested, there’s more about Evesham Abbey, and the current research and conservation project on the site, here. Oh, and – if you’re perplexed by what looks like a miniature conifer forest below the bell tower in this image, it’s a Christmas tree nursery; even now the Vale of Evesham is extensively involved in horticulture.

Back at home we did the initial preparations for a batch of dulce de membrillo, chopping our quinces and boiling them in water till they were soft, and then straining the pulp in a jelly bag. Pulp and liquor are now in the fridge, ready for cooking tomorrow.