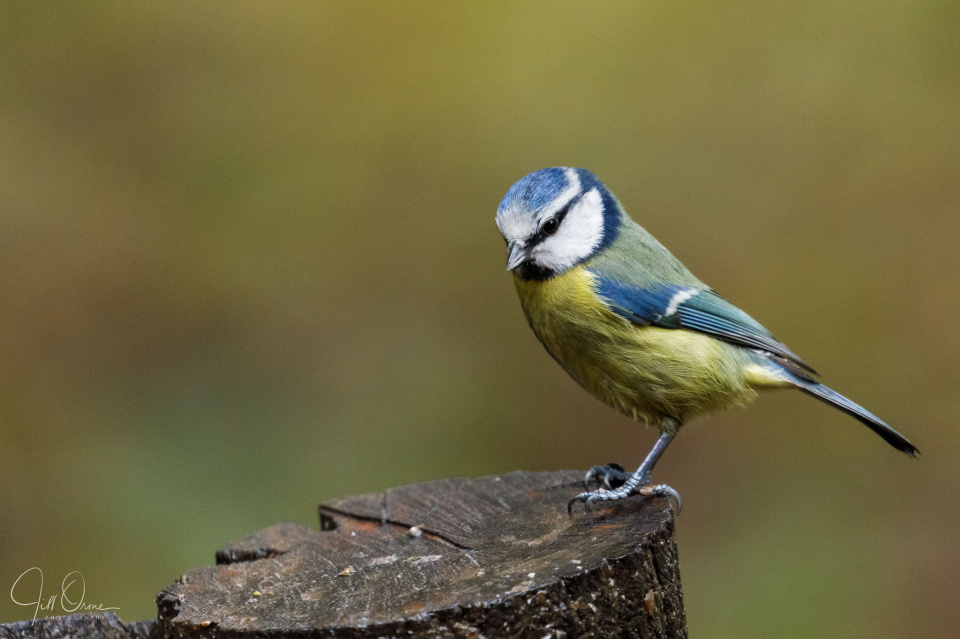 R and I went to Hillers for lunch today, and though I only managed half an hour in the hide, it was quite a productive session. As well as a range of small birds visiting the bird table, I was entertained by a great spotted woodpecker, which flew in and out of the clearing, paying visits to one of the nut feeders, but also drilling the bark of a small tree for insects and grubs; on this occasion it was down at a rather vulnerable level, and after a few seconds was seen off by a squirrel that apparently took exception to the mining activity. A fallow doe and her fawn also visited to browse the discarded farm shop produce, and though the fawn was especially nervous I managed to capture a handful of reasonable shots of it.

I’ve chosen to feature this blue tit though, partly because it’s quite a while since I last posted one, but mainly because I really like the photo – they’re such attractive little birds, and full of attitude. I’ve learned that when I’m being scolded loudly by a bird I can’t see and whose voice I don’t immediately recognise, there’s a good chance that when I do eventually catch sight of it, it will turn out to be a blue tit.

This evening R and I have been to the cinema to see The Aeronauts, starring Felicity Jones, who acts her socks off, and Eddie Redmayne, who phones in one of those socially-awkward-but-diffidently-charming characterisations that made me want to slap him. The special effects were good enough to make me feel physically sick, and the whole thing would have been improved by the Jack Russell getting more screen time. I’d wait for it to turn up on television, if I were you.