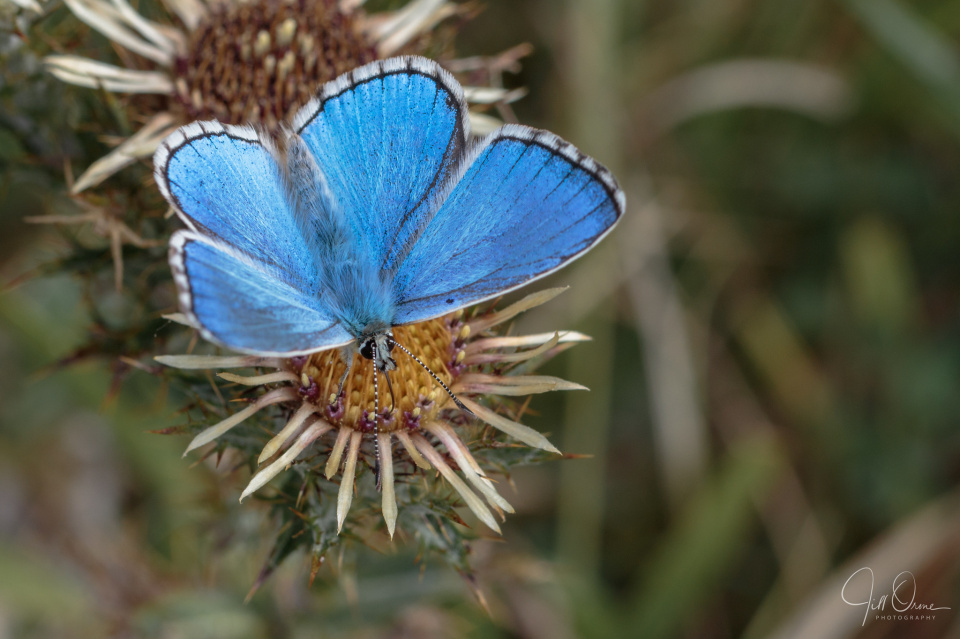 Someone posted in a Facebook butterfly group this morning that the second-brood Adonis Blues have emerged at Rodborough Common, so this afternoon I zoomed over there to see if I could find some. This is a butterfly of chalk downland, and is relatively common in the southern counties of England, but this site close to Stroud is about as far north as it’s currently found, and I had never seen one before today.

I was aware from researching the species that this is a butterfly that lives in concentrated colonies, but when I found the right place I was still surprised by how many I saw on quite a small slope. The males are very obvious, because they seem to like to bask with their wings spread – though when one senses your approach the first thing he does is to snap his wings closed, rendering him almost invisible against the background, and quite often the first you see of him is when you walk a little too close, and he suddenly lifts off near your feet in a flash of electric blue. Living in close proximity to each other, the males are relatively peaceable, and two or three will even nectar together on one flower. Females are much harder to find – I only spotted two, versus maybe thirty males; they’re largely brown, and they seem to prefer to sit quietly with their wings folded among the grass stalks at ground level, rather than basking as the males do.

I’d wondered before seeing the Adonis Blue if it would be difficult to distinguish from the Common and Chalkhill Blues which are its quite close cousins, but I needn’t have been concerned: the fringe around the wings of a male Common Blue is white, whereas the Adonis Blue fringe is banded with black, as you can see here; and the Chalkhill Blue (which does have a faintly banded fringe) is a fairly pale aqua blue, with a kind of scalloped pattern of blue and black on the hindwing. The underwing of the Adonis Blue is also quite distinctive, partly because of the banded fringe, partly because the spots are different to either a Common or a Chalkhill Blue, and partly because the two wings are different colours – if you look at the extra photo I’ve posted, you’ll see that the forewing is a fairly dull buff colour, while the hindwing is a brighter tan. 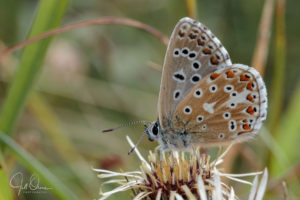 As to the upper surface of the wings, I can assert with hand on heart that they really are this startling shade of blue. Back in the 1980s this was a very fashionable colour; my flatmate and I (keen watchers of American soaps) used to refer to it as “Dysentery blue”, because it was frequently worn by the women in Dynasty. In the early days of my relationship with R I had an evening dress in just this shade, in a heavy iridescent satin fabric that caught the light in a very similar way to these wings. Sadly, a waiter at a formal dinner managed to drip sauce onto the skirt, and it shrank at the dry cleaners (at a time when my own dimensions were heading in the opposite direction), so I had to give it away. I’m not sure I’ve seen anything quite as vivid a blue from that day to this.

I was a little anxious during my walk, because I knew from my research that the Adonis Blue likes closely-cropped turf, and the grass at Rodborough is long and tangled at the moment; also, there are very few plants in flower to provide nectar, and hardly any horseshoe vetch, which is its main larval foodplant. All of this seems to bode rather badly for the success of this brood, and I can only hope that this beautiful but quite fussy butterfly doesn’t disappear from Rodborough Common altogether.