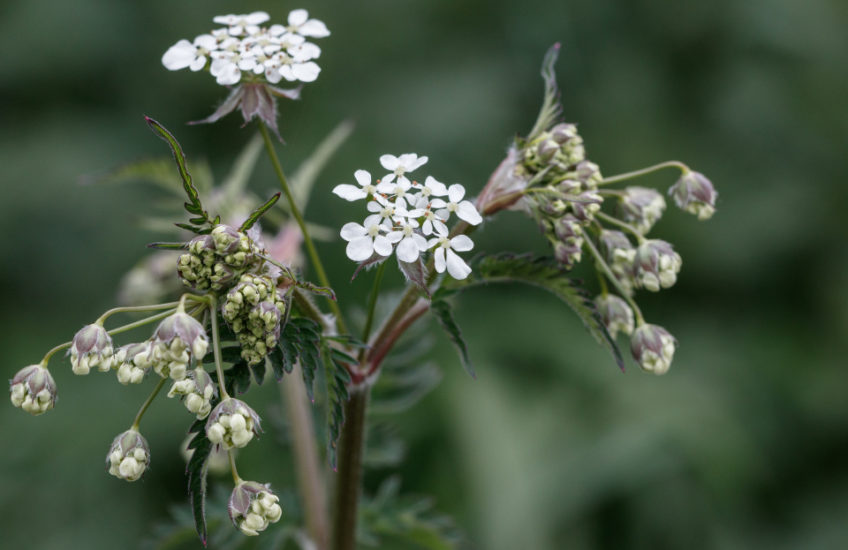 I was tired today, and out of sorts for most of it – not least because the weather had turned cold and overcast, which made gardening unappealing and bug hunting largely fruitless. But I did need to test the 7D and macro (after accidentally pulling them off the desk and onto the floor the other evening), and as I heard yesterday that I’d failed to make the shortlist for this year’s IGPOTY Mono Project I thought I might start looking for potential images for their next competition, the Macro Project.

I was wandering around photographing blossom and such, but not really liking much of what I was capturing, when the pale glow of this emerging cow parsley caught my eye against the gloomy verge across the road from the house. This is too broad a view to count as a macro image, so I won’t be submitting it to IGPOTY, but there’s something about it that pleases me; I’ve kept it quite low key to try to convey the feeling I had when I saw it.

When I was a child we called this plant mother-die, and were told that it was very unlucky to bring it into the house. I’m interested in old superstitions, which are generally rooted in some kind of common sense, but I can’t work out what underlies this one; it may simply be the fact that though cow parsley isn’t poisonous, it’s easily mistaken for some other plants which are, such as poison hemlock – though that seems a little tenuous. I know that my mother’s objection to the stuff was less the idea of mortal peril than the thought of it seeding itself around her garden, which it does prodigiously if given the chance – and each seedling that takes develops a nice deep tap root which has to be dug out, usually more than once. I used to worry about this myself, back in the days when I had some pretensions to being thought of as a gardener; but now I’m happy to see cow parsley because it provides food for a variety of bugs.