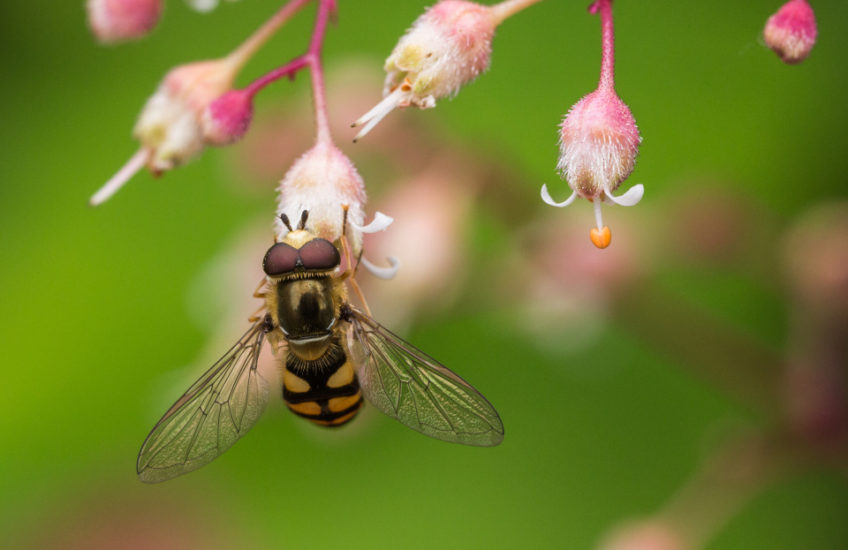 I had wanted to go on a butterfly hunt today, but the morning was overcast and chilly, which didn’t encourage me to drive for half an hour and then walk a couple of kilometres from the car park to the nature reserve I had in mind. So I stayed home and had a pretty boring day: accounts and filing were done, and payroll, also some weeding, plus a fair bit of general faffing around.

The light was still pretty poor when I went on my bug hunt for Tiny Tuesday, but I managed some reasonable shots courtesy of the 5D’s handling of high ISO. This is one of a batch of photos I took in the same place; the plant is Heuchera ‘Marmalade’, and I know that hoverflies and small bees can’t resist it, so I got down onto a weeding kneeler next to it and waited to see what would turn up. In the space of about quarter of an hour I had shots of three different hoverflies, two species of bee and a wasp – this really is the plant that keeps on giving, especially as it will flower right through to the early autumn.

The fly here is Eupeodes corollae, the Vagrant hoverfly. It’s one of our most common species of hoverfly, with numbers in Britain often boosted by migration.

*Fights with self not to make snide comments about the Leave campaign in the Euro referendum, and wins. Just.*

Where was I? Oh yes. This is a male – which you can tell by the fact that his eyes meet on the top of his head, whereas females have a gap between the eyes. His body is maybe 1cm long, and the excellent condition of his wings shows that he’s a fresh specimen. E. corollae larvae feed on aphids, but according to Wikipedia an experiment in using them to control aphids in fruit plantations was a failure because they turned out to prefer the fruit.

I chose this particular shot because I was pleased with the focus on his eyes – if you have the time to look full-screen, I think you’ll see what I mean.