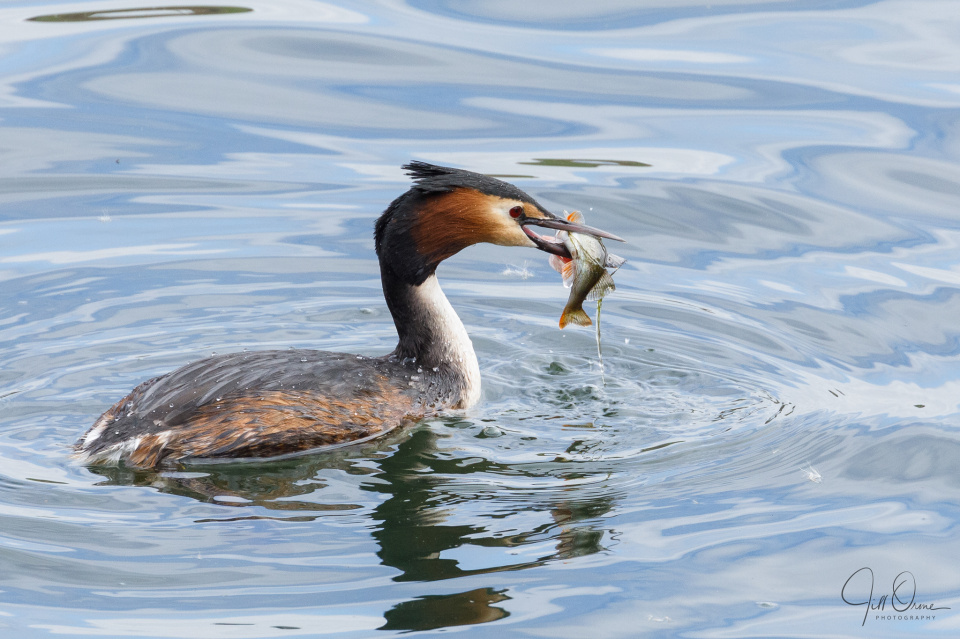 I made a return trip to Compton Verney this morning, ostensibly to get some fresh air and exercise, but actually to check on the great crested grebe I posted about ten days ago, about which I’ve been worrying slightly ever since. Today’s visit confirmed two things: firstly, this is a male bird, and secondly he has definitely lost his mate.

He spent quite a lot of the morning searching his territory and calling, and at one stage swam under the bridge and called in the southern section of the lake, possibly in the hope of poaching the distaff half of the other breeding pair which nest there. As you’d expect, this caused a bit of a kerfuffle, with the southern male coming out of the reed bed to defend his territory and his partnership, and though this chap fluffed himself up to twice his normal size and swam towards the incumbent in a pretty threatening posture, he chose not to push the situation to outright confrontation, and after a few minutes retreated to his own side of the bridge.

Once back in his own territory, the first thing he did was to dive and surface with this substantial fish, which he then spent a couple of minutes killing and manoeuvring into the correct alignment so that he could swallow it. I know virtually nothing about fish, but this one had a very spiky dorsal fin, and its other fins and the lower part of its tail were orange, which I think might make it a perch. If I’m wrong, I’m more than happy to be corrected.

Following his lunch the grebe searched his territory again, and then spent a while calling and doing a kind of display – stretching his neck and raising his crest, in the same way that he would to impress a female. He then went into the reed bed and did some more work on his nest platform – by which time I was feeling so sad about the situation that I decided to call it a day and go home. It’s not impossible that he might yet acquire another partner, but the entire UK population of great crested grebes only runs into a few thousands, so the chance of an unpaired female moving into his territory within the next few weeks does seem fairly remote.