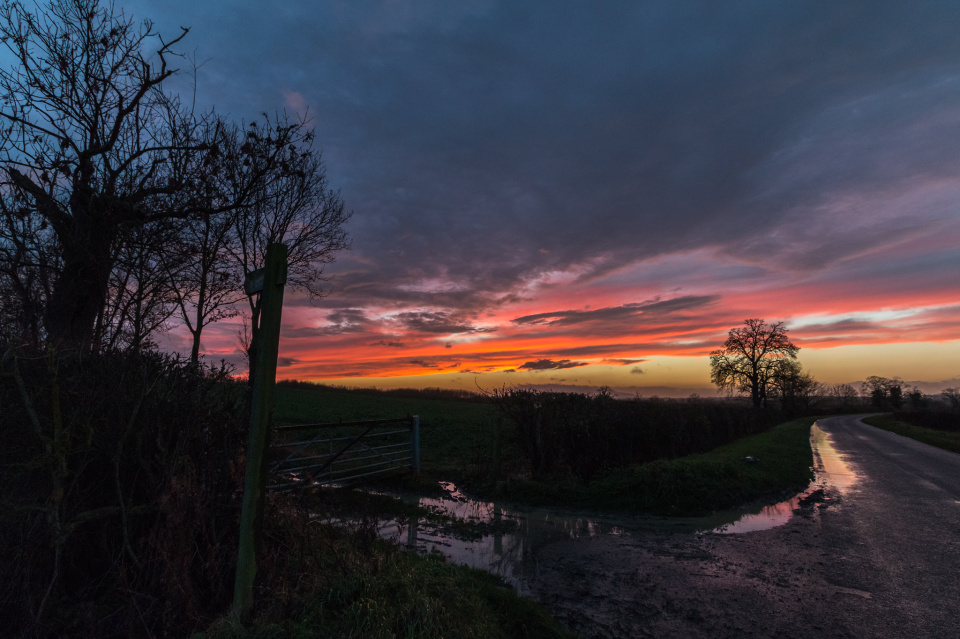 Someone on the news this morning pointed out that this time next week it will be Christmas Eve. I immediately had to go back upstairs and lie down in a darkened room.

The only time I’ve ever been less prepared for Christmas at this juncture than I am now was in 1989, when I had the reasonable excuse of having recently spent a day and a half in labour. Lacking that Get Out of Jail Free card this year, I threw a bit of a hissy fit (quite a bit, if I’m honest), then bestirred myself, did a Christmas card label run, and put up the rest of the Christmas decorations. Just before 4pm I was walking downstairs with another armful of glitter when I glanced out of the tower window and saw that there was a decent chance of a sunset, so I popped out with the camera and had a fun few minutes chasing light and angles.

As I was taking this I thought it was The Shot; and after uploading to the Mac I processed it before all the others and really liked it. Why I then spent four hours fartnarkling around with all the others in the set before finally coming back to this is anybody’s guess – I don’t often set myself New Year resolutions, but next year’s will be to stop wasting so much of my life in Lightroom.

Speaking of New Year, Nickimags888 posted in Blipfoto Friends today that she had signed up for a free on line photography course which will be running on a weekly basis through 2016, and when I checked it out it looked so interesting that I signed up too, along with quite a few other blippers. If you’re interested but haven’t heard about it, you can read more here.

In other news, I heard today that a photo I blipped back in May and recently submitted to Stratford Clicks has gone into an exhibition at The Picture House in Stratford, which is rather exciting because I’ve never been exhibited before. I’ll have to go and take a look – R said that I should take a photo of my photo, but I suspect he might not have been entirely serious.

And finally, one of my photos of Roley was chosen by Nick Kelsh this morning as Fan Photo of the Day on his Facebook page How to Photograph Your Life – which led to lots of sweet comments about him from some of Nick’s subscribers. I was reduced to tears quite a few times over the course of the day, but in a good way. Roley, of course, would have thought the attention no more than his due!