When I woke up this morning to the sound of a vehicle slushing along the road in front of the house, I realised that Child Two had made the right decision in driving back up to Leeds yesterday – and when I turned on the news and saw the snowy chaos prevailing on roads throughout the north Midlands, I was profoundly relieved that he was safely back in the city.

R and I had to go out on errands at lunch time, and I took the camera in the hope of a picturesque shot, but the roads between here and Stratford were almost clear and the sky flat and grey, and the most interesting (and worrying) photos I took were of the river Avon bursting its banks at Bidford. Given the amount of rain we had on Christmas Day and Boxing Day, that’s not really a surprise; but once the snow melt reaches the river, and with the fields already saturated and more rain forecast, the situation is likely to get worse – so people living along it are likely to be in for an anxious few days, watching the water level and preparing for possible flooding.

Later in the afternoon the sky cleared, and R came back from his walk suggesting that better photos might now be on offer. We set off in the direction of the Broadway Tower, but discovered that Saintbury Hill was blocked above the Campden Lane crossroads – we couldn’t see exactly what the problem was, other than the fact that at least one car was stationary, but it was obvious that we weren’t going to be able to get any further. A delivery van driver was trying – and for a while failing – to use the crossroads to execute a three point turn, and while R waited for him to complete his manoeuvre, I got out of the car and took a few shots across towards Meon Hill, which as you can see here was prettily picked out by the setting sun.

I’ve talked about Meon Hill before: it’s a scheduled monument, being the site of an Iron Age hill-fort, and its tree-fringed plateau makes it one of the most recognisable landmarks in this area. It’s a slightly spooky place – I wouldn’t want to be up there on my own after dark, even though I don’t believe in the ghosts which reputedly haunt it – and it has the macabre distinction of having been the site of a gruesome, and still unsolved, murder back in 1945. Since R and I went to the exhibition at the British Museum a few weeks ago, I’ve found myself imagining its Iron Age inhabitants as being somewhat similar to the Scythians – though less nomadic, obviously, and probably rather less well dressed.

Once the delivery van had turned and set off back down the hill, R and I did the same thing; we could still have tried to get to Broadway Tower via the main A44, but as the last half mile of road that runs to it is a continuation of Buckle Street – the road on which we’d got stuck – we decided that discretion was the better part of valour, and headed on into Broadway instead. 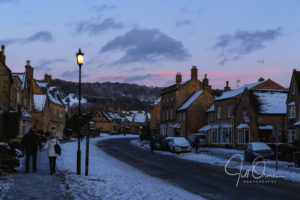 After we’d parked the car we walked up into the upper part of the village, which is where I took the extra. This section of Broadway High Street used to be part of the main road through the village, but after a couple of incidents in which vehicles coming down off the Cotswold scarp suffered brake failure, it became clear that sooner or later there was likely to be a horrible accident – so a by-pass was built, and the upper end of this road was blocked off, turning it into a dead end and making it by far the most desirable bit of the village in which to live. Without the heavy traffic that runs constantly along the lower High Street it’s also the most picturesque part of the village, I think.

I’ve put a selection of this afternoon’s photos here, if you’d like to see a few more.