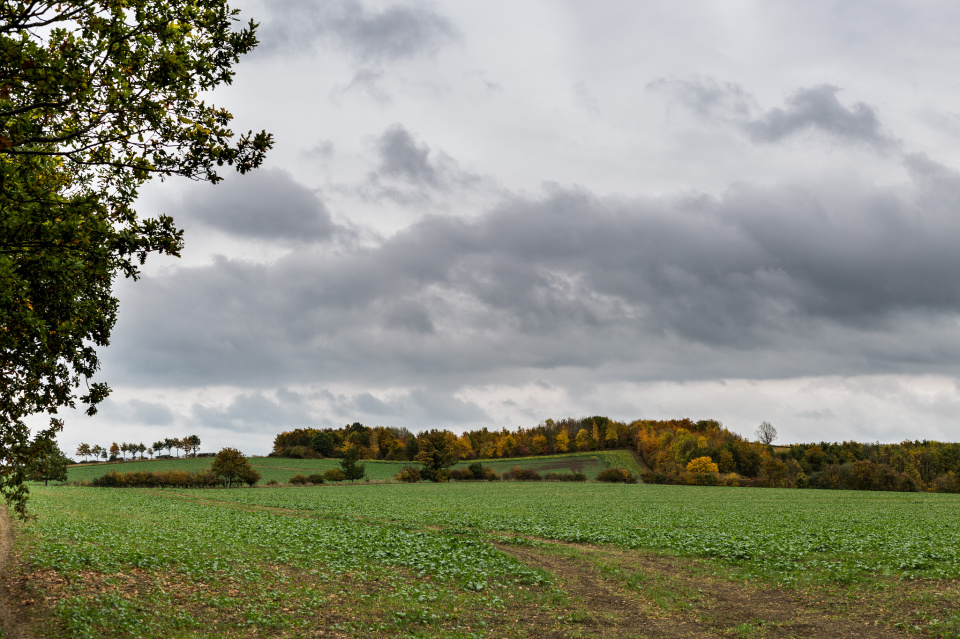 R and I went to Stratford this morning to run exciting errands – principally going to the recycling centre, and buying dog food – and on the way home we took a route that allowed me to photograph some of the lovely autumn colours we’re currently enjoying. Some of today’s other photos will go on Facebook later, but I’ve chosen this one to blip because It’s the first time I ever remember seeing Shine Hill decked out in all this gold.

If you’ve been looking at my stuff for a while you’ll probably recognise this as a view I’ve posted a number of times before – I often get dawn shots here, and I photographed this field about three months ago when it was full of wheat. Whether I’ll be able to carry on sneaking in to take photos is questionable – the farmer seems determined to keep people off his/her land, and has started barricading any fields which don’t have gates with straw bales (and round the other side of the hill has even removed a public footpath sign, which I keep forgetting to mention to the Council); but this morning I was still able to get far enough in to take my shot without treading on the crop.

Back at home I did some more work on the Mac, which I’m starting to find my way around now, and also quite a lot of physical sorting out of my study. The latter involved going through a huge crate of stuff which used to belong to my parents, and which came to me as keeper of the family archive after my mother died, and sorting it into smaller boxes which R then put in the loft for me. Even though it’s several years since Mum died I found this very hard to do, and it has left me quite down – though it was beyond time that it happened, and definitely worth doing for the space I’ve generated in my work area. I’m still surrounded by boxes and boxes of photos from both R’s and my families, the sorting out of which never quite seems to get to the top of our list, but maybe now I’ve done today’s organising I’ll be more motivated to push that project forward too.

To end on a more upbeat note, if you’re a Lightroom user but still stuck (as I was until this week) on LR5, I must say that I’m impressed with a couple of the features in LR6. The much-heralded “dehaze” slider seems essentially to boost contrast and clarity, though it’s quite useful to have this in a single adjustment tool; but more excitingly the panorama tool seems to work very well indeed – it’s quick, and the stitching appears very accurate. I haven’t tried the HDR tool yet because I don’t have any bracketed shots to hand, but I might experiment with some the next time I’m wondering what to do with an hour or two.