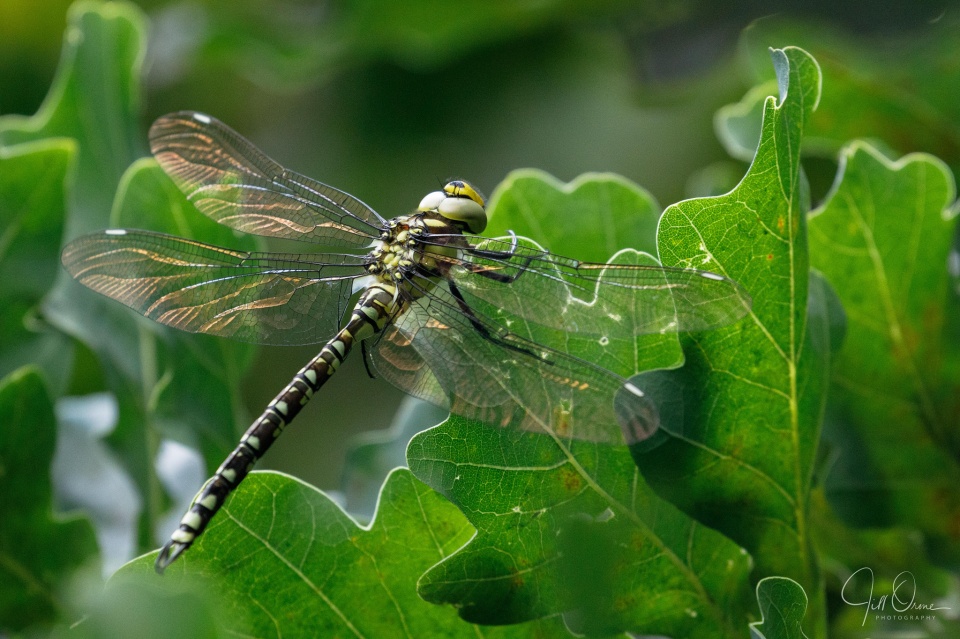 I’m getting quite good on the stepladder now, if I do say so myself. And I may as well, because it’s highly unlikely that anyone else will; certainly the two Southern Hawkers I photographed from the top of it at different points in the day appeared unimpressed.

I’m pretty sure that we had three male SHs in the wild garden today. This one is so fresh and pale that he’s quite distinctive, but comparing the wings in my other photos, I believe that there were two fully mature specimens patrolling as well. I didn’t see the female at any point, but if she didn’t want to be mated she’d stay out of the way while there were males about – there are plenty of other gardens along this lane where she could have hunted in peace, while all the boys were in ours.

I was especially pleased to have captured this photo because it solves a little mystery I’ve been pondering. A few days ago R and I both watched a very fresh, pale hawker flying low to the ground in strong light, and with its markings impossible to distinguish, the most obvious thing about it were its dazzling copper wings. Usually this would suggest a Brown Hawker, but I’ve never seen one in the village before and I was dubious about claiming one now. I almost emailed the County recorder to ask if immature Southern Hawkers can display coppery wings, but he’s a busy man and I didn’t want to waste his time, so I parked the question and waited to see if something would turn up that could answer it for me. And here it is: even in the relatively poor light we had this morning, this young Southern Hawker’s wings are showing a coppery iridescence. Presumably as he matures and they harden they’ll lose this quality, because I haven’t found it in any of my shots of the two older males.

This is Day Two of what the British Dragonfly Society has declared to be Dragonfly Week 2020, and it was nice of Mr S. Hawker to allow me to photograph a dragony phenomenon that I haven’t caught on camera before.