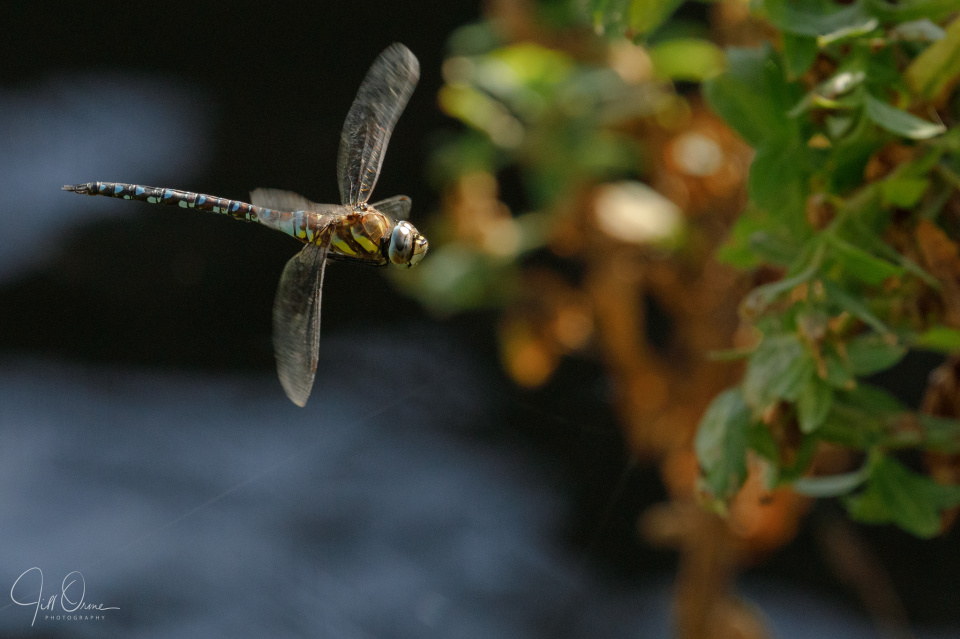 That is, he’s another Migrant Hawker, and he’s getting somewhat old and battered now. But despite his age he’s still quite bright and handsome – it seems to be female dragons that fade to a nondescript sludge colour, at which point they’re (rather dismissively, I feel) termed “over-mature”. I think you can probably insert your own “show up naked and bring beer” joke here: males will compete for the chance to mate as long as they’re physically able to, so they keep looking smart and zooming around demonstrating excellent flying skills, whereas females just have to… be.

R and I had to go to Stratford to run errands this afternoon, and although the weather is still very changeable I was lucky and got just a few minutes of decent dragoning light down at Lucy’s Mill Bridge. There were at least half a dozen male MHs parading, hunting and bickering, and R spotted one female being carried off by a successful suitor, though I didn’t see the mating flight myself. I spent a while trying to get a shot of one of the boys from above, with just the dark water as background, because I think that would be an interesting perspective, but none of them hovered below me for long enough to allow the camera to focus. This chap, on the other hand, hovered in this spot near the bank for a good fifteen seconds, checking something out, and was therefore pretty easy to capture; I’m not crazy about the very contrasty light and that bright foliage in the background, but they do make this image markedly different to some of my other recent efforts.

Back at home I decided to join the modern world and put a banking app on my phone (if only to stop R telling me every other day that I should have a banking app on my phone). Downloading it took a mere matter of seconds. Getting it to work cost me an hour of my life, required two lengthy phone calls to the bank, and involved the use of language I normally reserve for describing Conservative Party politicians. I’m now going to go and lie down in a darkened room.