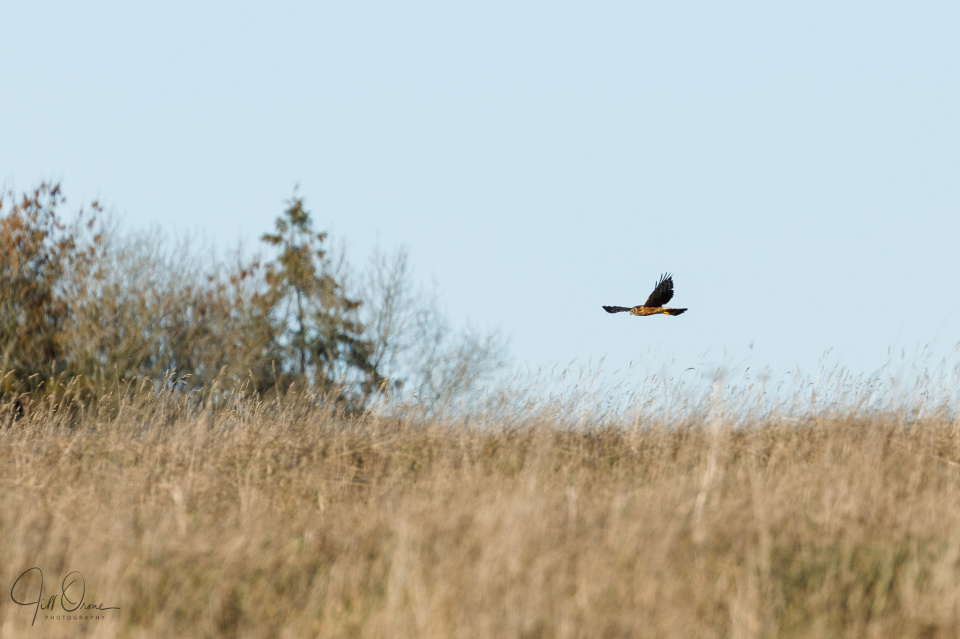 The news that both short-eared owls and a hen harrier have been making regular appearances in the high Cotswolds over the past week, coupled with a fine, bright and relatively windless day today, made for a positive scrum at The Wall this afternoon. Most of the usual suspects were present – bar Hillyblips, currently sunning herself in Costa Rica – along with a few faces I didn’t recognise (though, to be fair, I wasn’t wearing my glasses, and in any case I’m better with animals than people).

I was standing at one end of a line of photographers when the harrier made this fly-past along the ridge, and the general consensus was that it was rubbish. Too far away. The bird needed to come closer. Personally I was thrilled, because I’d never even seen a hen harrier before, and here I was photographing one – another tick on my mental list! So although this is only a record shot, I’m happy to be posting it; it will look marginally better full-screen, if you have the time to check it out.

In the end I removed myself from the temptation to start shushing everyone else, and walked around to a path on the north side of the ridge, in the hope that the bird would fly past where it was quieter. She didn’t, but late in the afternoon a short-eared owl rose up to take a look around for a few seconds, bringing a huge grin to my face. “Welcome back,” I said, as I rattled off some frames – at an even greater distance than this, unfortunately, but still – the new season has begun, and I’m happy to have been reminded that there is, after all, life beyond dragons.

I’ve said “she” about this bird because I know for a fact that it isn’t an adult male – they are a pale blue-grey colour, with dark wing tips. Juveniles look very similar to the adult females, though to an expert eye (unlike my own) there are differences; both are referred to as “ringtails”, because of their pale tail coverts. Adult female birds are roughly the size of a carrion crow (as this one appeared to be, when a crow harassed it off the ridge shortly after this); males are only about two thirds of that size.

Hen harriers were extinct in mainland Britain by the early C20th, though they retained a stronghold in Orkney, and after World War Two they gradually repopulated the mainland. They remain under threat though, largely due to illegal persecution around shooting estates. They primarily eat small rodents, though they also take small grassland birds such as pipits, and they will predate the young of game birds such as grouse  – which of course brings them into conflict with the people who breed those birds to be killed for profit. Farmers tend not to mind them, because they don’t pose a threat to poultry but do kill rodents that can damage crops.

Hen harriers breed on the ground in high moorland, and in young conifer plantations. Out of the breeding season they spread to lowland and coastal areas, where they favour open territory like this; in winter the resident population (thought to be somewhere between 500 and 1000 pairs of birds) is boosted by incomers from the Continent. They glide low to the ground when hunting, circling an area and dropping onto prey when they find it. Like short-eared owls, with which they can come into conflict, they have very acute hearing (helped by the facial disc you can just make out in this photo), and home in on their prey by listening for the sound of movement within the vegetation below them.

If you’re interested, the RSPB is running a hen harrier conservation project, and there’s some information about it here.