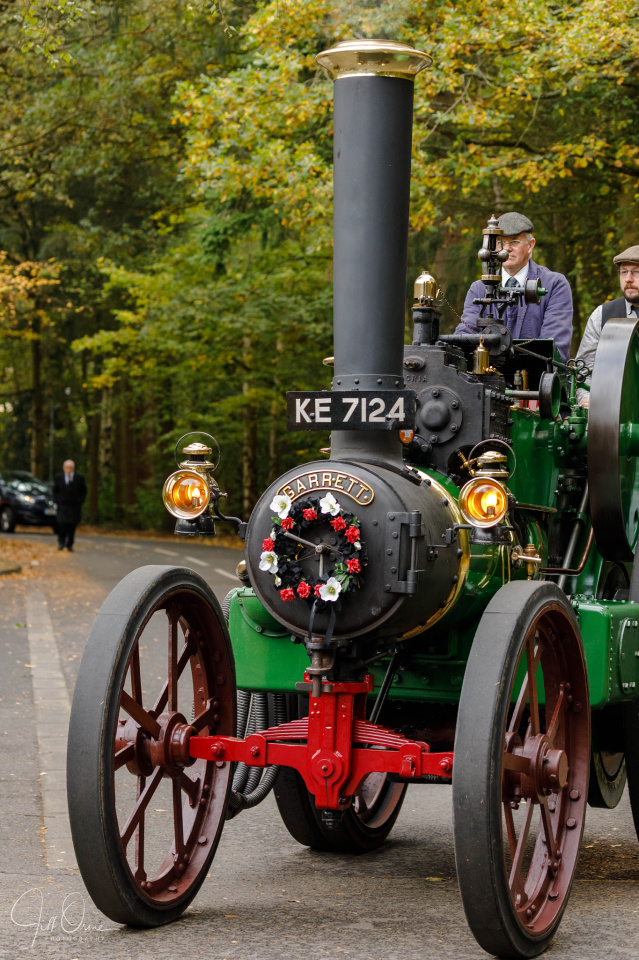 I arrived at Oakley Wood Crematorium today for the funeral of Malcolm Ranieri, FRPS, renowned photographer, published author, and lover of vintage transport, classical music and Doctor Who, to find myself in the slowest cortège I’ve ever been a part of. At its head was this beautiful Garrett steam engine – which reassured me that I was in the right place at the right time, because vintage steam traction engines were another of Malcolm’s “things”.

The chapel was packed to the doors, with people from all of Malcolm’s fields of interest wanting to pay their respects, and to share their shock and sadness at his sudden death. The service was moving, and the eulogy, delivered by a friend of forty years, brought me to tears. At the moment when the curtains closed on Malcolm’s coffin, the Garrett delivered a great blast from her steam whistle; and we all left the chapel to the theme from Doctor Who.

Needing some time to myself, I went for a short walk in the woodland next to the crematorium, and when I returned to my car half an hour later people were still standing outside, swapping stories about Malcolm. He was such a lovely man: kind, funny, generous of spirit, and with absolutely no side to him at all. I think it was last year when he put a photo into a club competition that was quite a lot different to the usual, very distinctive “Ranieri” style – this one had blue sky, a green landscape, and a red steam train running along the horizon, and it looked quite a lot like an illustration from a children’s book. The judge scowled at it with disfavour, humphed, and said something along the lines of, “With no disrespect to the author, I really don’t feel that this is a competition image. It looks to me like someone’s nice holiday photo.” Malcolm wasn’t present at the time, but the following week I heard someone regale him with this judgement; in response the FRPS photographer smiled with perfect equanimity and said, “Well, he’s absolutely right. It is a nice photo, and I did take it on my holidays.”

Travel well, Malcolm. You’re going to be missed by a huge number of people.