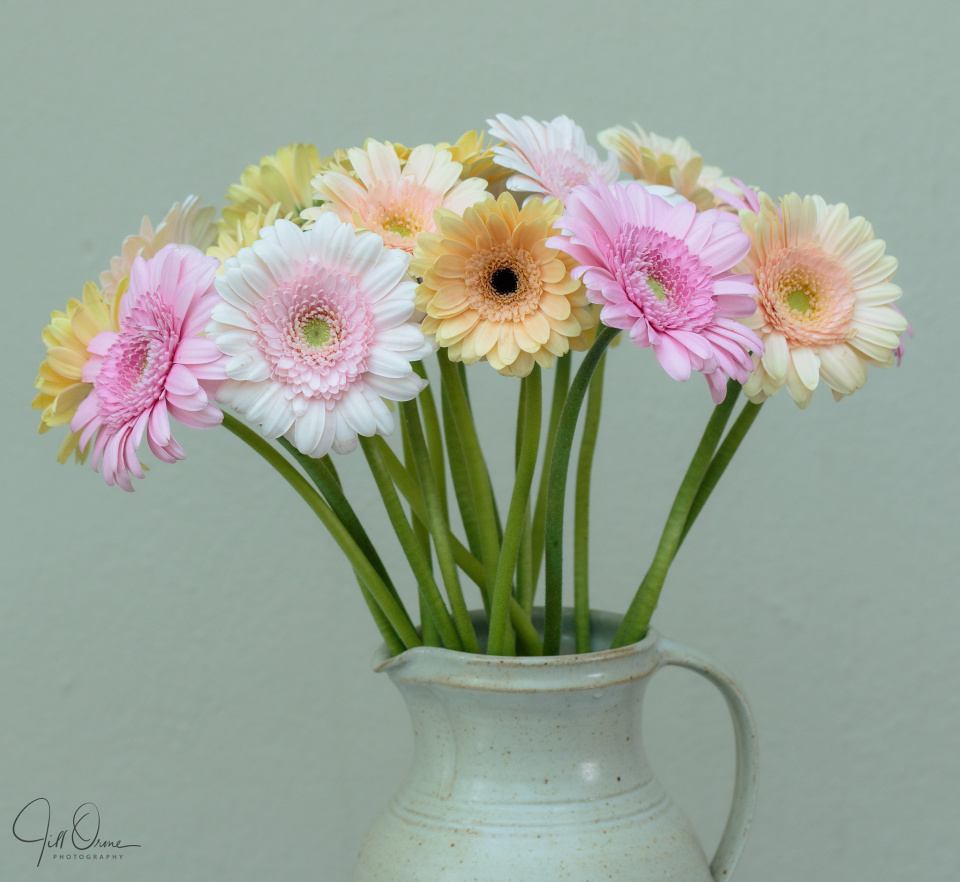 I made a rare visit to Waitrose in Stratford this morning, in search of a few things we can no longer buy from Ocado, and for which Ocado provide no acceptable substitute. I hate supermarkets, but as I was there I had a bit of a rummage around (asyoudo), and came home with more than I’d set out to buy – including this bunch of gerberas. Walking back in the house, I was met by my husband with the jovial greeting, “Thirty three pounds, eh?!” – which is how I discovered that he’s turned on notifications in the banking app on his phone, and my cunning plan to sneak a Canon R5 into the house and tell him three months later that I can’t remember when I bought it but I’ve had it for ages, just fell to the ground with a bump.

He received a Very Special Look.

I like gerberas, but they tend to come in bunches of half a dozen mutually incompatible colours, so when I saw these pastel ones today I was very taken with them. The other problem with gerberas is that however nice they look in the shop, by the time you’ve got them home they’ve revealed any number of unphotogenic blemishes on the petals. And the other problem with gerberas is that they won’t stay where you put them in whatever container you’re using, preferring instead to twist and flop about all over the place. For which reason they tend to bring out my inner Gumby.

I had a bit of a job getting a reasonable photo, what with the petal damage and the flopping around, not to mention a severe lack of light, even at 2 o’clock in the afternoon. In the end I bounced the light from a soft box up onto the conservatory roof, which is why there’s a small highlight on the jug in this shot. R preferred a close-up view I took of the other side of the bunch, but I’m showing my disapproval of the fact that he and the banking app are talking about me behind my back by picking my own blip today.

(NB – I’m only joking, which is why I’ve started using the photo he likes as my Facebook header.)