I know: I’ll give you both.

Today was busy, busy, busy. This morning I did some domestic stuff, and some photo stuff; and then R and I booked a holiday for later in the year, and some tickets for Child One’s upcoming Cardiff Animation Festival, and also for the Broadway Arts Festival. Then R mowed the lawns, while I pruned half of the roses – leaving the garden looking much better, provided you don’t get too close. The warm and sunny day brought out an astonishing number of bees, including some big bumblebee queens, though there’s still very little in flower that they can feed on, and I fear they’re all going to be fighting over the pulmonaria for the next couple of weeks.

By this point it was mid-afternoon, and I wanted to go out, but delayed long enough for us to make and eat a meal; so it was after 5pm (new time) when I arrived at the owl field. It was heaving with photographers, which may be the reason that, although the conditions were perfect, the owls weren’t especially co-operative – mainly choosing to hunt a long way away from the lane. I didn’t particularly distinguish myself with the lens today either, but did manage a couple of fly-past sequences that I’m quite pleased with, and also a few shots of the owls in combat mode, which I’ve put on Facebook. It was only when I was leaving that I realised I’d been working about fifty yards away from Hillyblips, but neither of us had spotted the other in the crush.

On my way home a spectacular sunset began to develop. I resisted the temptation to stop at Broadway Tower to photograph it, but a few miles further on the urge to capture the colours became overwhelming, so I stopped in a field gateway by Sheen Hill and took this image. 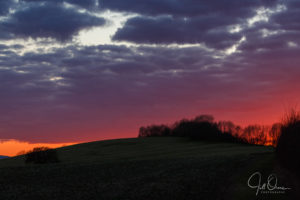