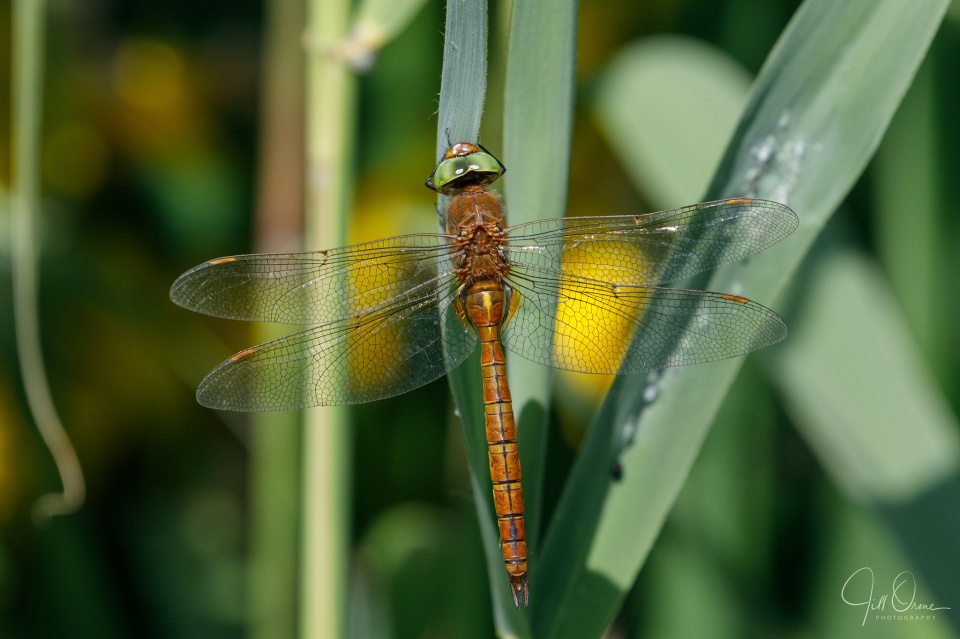 This is a Norfolk Hawker, so-called because it was once a very rare dragonfly in this country, and was more or less confined to the East Anglian fens. It’s quite common across central and southern Europe, where it’s known as the Green-eyed Hawker (a better name, I think, though Norfolk Odonata-fanciers would probably disagree). Although it’s still red-listed as an endangered species in the UK, over the past decade new populations have been found in Essex and Cambridgeshire, which is where I went today in search of this strikingly handsome dragon.

Paxton Pits Nature Reserve must, I think, be one of the best Odonata sites in England: within just a few metres of the visitor centre I found not only Norfolk Hawkers but also Emperors and Scarce and Four-spotted Chasers, all patrolling a small pond, and as I walked further into the reserve I had dragons literally whizzing around my head. A study of the Norfolk Hawker by Leyshon and Moore found that in this country it usually coexists with Hairy Dragonflies, Scarce Chasers, and Variable Damselflies, and that it favours sites with a high density of water-soldier plants – all of which conditions are met at Paxton Pits. I failed to find any Hairies today, but that’s a species that seems to elude my lens, so I wasn’t surprised, and given the plethora of other photo opportunities I had, I wasn’t especially disappointed.

R has chosen this photo because he says he likes to see a dragon four-square. I like it because it because it shows the characteristic markings of a Norfolk Hawker: a gingery-brown thorax and abdomen, with no shoulder stripes and a yellow triangle on S2; largely clear wings, with orange pterostigma and small orange patches at the base of the hindwings; and startlingly green eyes. To me the abdomen looks as though it’s bound in tan leather, and the thorax in suede. This is a male, as you can see from his claspers, but females are very similar, though slightly thicker in the abdomen; a side view would show you a pair of yellow stripes on the sides of his thorax, but these are quite variable even in males, and are fainter in females.

I’ve put a couple of other images on my Facebook page, if you’d care to see them.