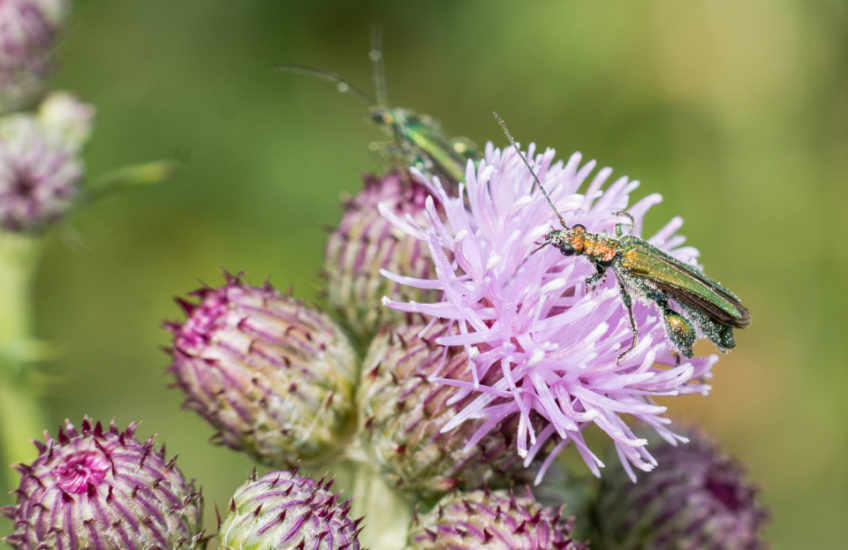 I’m happy today because I’ve managed to take photos of two bugs that I had never photographed before.

The main image (which looks much better large, against the dark background) was taken on our pack walk this morning. I had the camera because I knew we’d be crossing a wild flower meadow and I thought I might capture some shots of butterflies, but the butterflies were having none of it and I was getting seriously grumpy, when I suddenly spotted these iridescent beetles on a thistle flower. I knew I’d seen photos of them on this site but I’d never seen them in the flesh before, so I became quite excited and the butterflies were all but forgotten.

Oedemera nobilis is commonly called the false oil beetle, the thick-legged flower beetle or the swollen-thighed beetle – although only the males have these very fat thighs. It eats pollen and nectar – messily, as you can see – and isn’t regarded as a pest. It’s very common in Mediterranean countries, but has been found as far north as Denmark and is now increasing in Southern England.

The extra was taken in the garden just after we got home. There were originally half a dozen hoverflies feeding on this opium poppy, but as soon as I took the first batch of shots they all flew away. Luckily, a few seconds later this single brave one came down, and stayed long enough for me to get several decent photos. 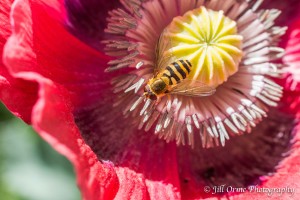 A second cause of happiness today has been the reaction to yesterday’s blip – thank you for all the nice comments about it, and for all the stars and hearts. It’s rare for me to take street shots, and this has encouraged me to think that I should try it more often.