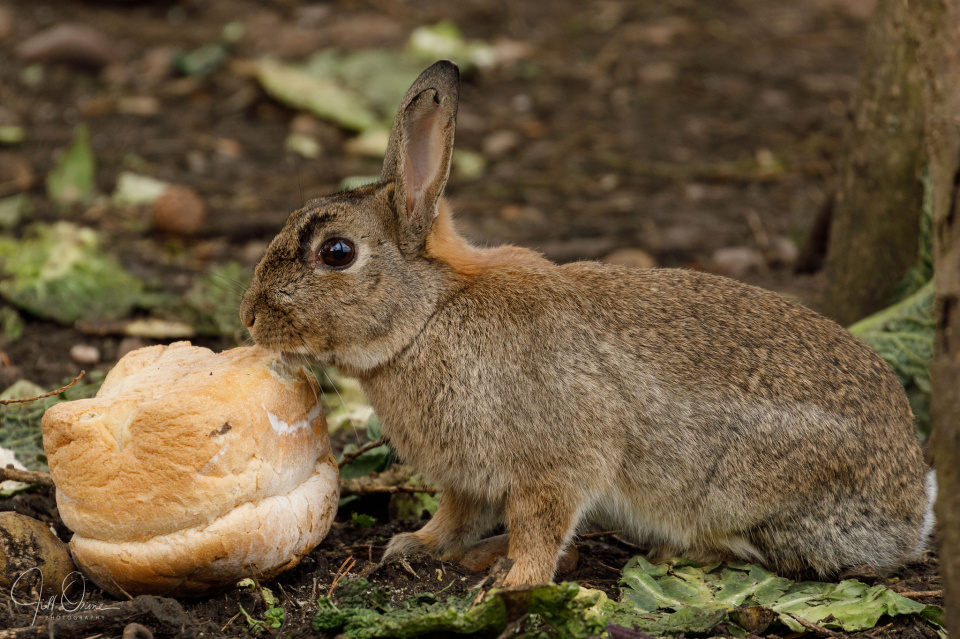 Despite my Senna the Soothsayer predictions, the A. plumipes that emerged last weekend have survived frost, gale, and flood, and appear to be thriving. In fact, plumpie numbers are exploding: there were at least a dozen in the garden today, including five that were simultaneously browsing (and bickering over) the rosemary bush in the yard. They were all males though; the one early female I recorded has disappeared, so she must have been carried off in the first cold snap, and no others have yet arrived. This makes the males especially tense and combative, and they seem to spend as much time bouncing off each other as they do either feeding themselves, resting, or patrolling their shared space on the lookout for girls.

So, I took plumpie photos today – but I wouldn’t want to test your affection for them to the limit. I also have a pretty spider, and a hoverfly… But I don’t think I’ve ever posted a rabbit before, and I rather liked this one that came to browse the left-over produce put out by Hillers Farm Shop next to their bird hide. As well as the farmhouse loaf it sampled a baguette and a seeded cob – but this was definitely the bake-off winner. The fruit and vegetables lying about were totally ignored, despite my reproving comment of “five a day”.

I wish to assert that in my own quest for five a day, I stepped around the chocolate tiffin and ate a piece of Dundee cake.