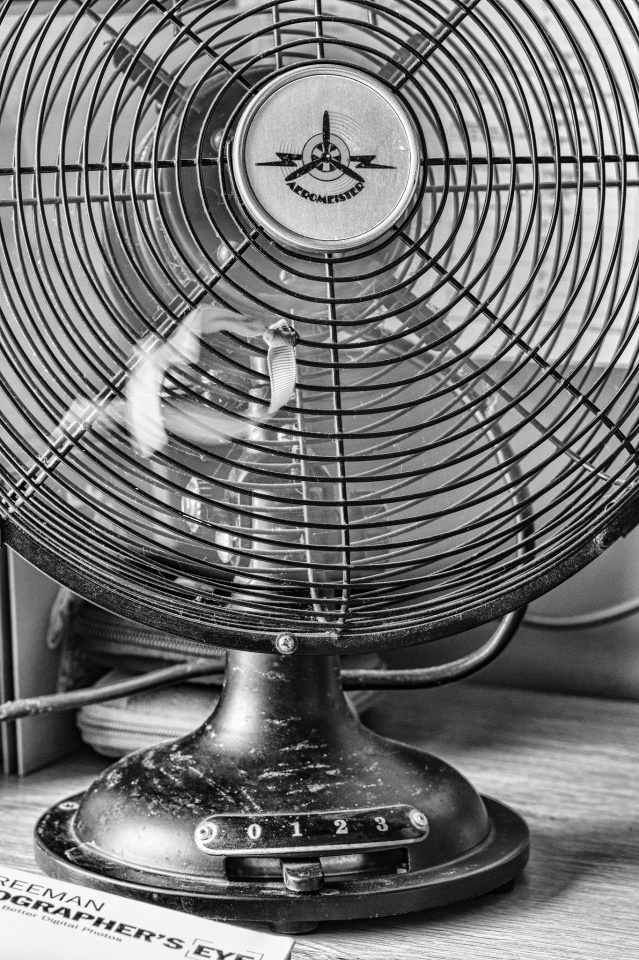 This is an idea I shamelessly stole from Ingeborg – well, they do say that imitation is the sincerest form of flattery.

We live in a large, old and unecological house; my study is on the first floor, and R’s is on the ground floor, near the badly-fitting front door which we can’t readily replace because it’s what is known in publishing as a bastard size. In winter he sits shivering in near-polar conditions, while I bask in the heat rising through the house towards its eventual escape through the roof, and complain bitterly when he surreptitiously turns up the heating. In summer however, he has the best of it – his study is cool, while mine is like a sauna: I’ve been known on occasion to work with my window blind down, just to allow me to sit in my underwear without scandalising the neighbours.

One day during the last hot spell R came upstairs to talk to me about something, and taking pity on my damp, pink person, went to the garage and rooted out this old electric fan for my desk. I’ve given it a grunge processing in Topaz B&W, to make it look battered and dusty.

It wasn’t my first thought for today’s challenge, I confess – I spent about an hour this morning searching for one of these, which I thought would make a really interesting shot; but though I know that Child One had one, and when asked she thought it might still be somewhere in the wreckage of what used to be her bedroom, it was not to be found. I did find some other things though: she told me a while ago that I was welcome to take the fossils and minerals she collected as a child for my Blip box, and they surfaced during today’s search – somewhat the worse for wear, and almost entirely devoid of labels, so expect some mystery macro shots in the future that are as much a mystery to me as to you!