R and I went to Cardiff today, for the final day of the Cardiff Animation Festival 2018, of which L is the Director. During a thoroughly enjoyable day at Chapter we watched two programmes of short films, and what I think may have been the first UK screening of the full-length Oscar-nominated film The Breadwinner, which is a stunning piece of work. We hadn’t expected to be able to spend much time with Child One – which was just as well because, except when she was standing at the front of the theatre presenting something, we generally only saw an L-shaped blur as she whisked past us – but during breaks in the day we had a nice time chatting with her partner G, and his parents P and M.

Happily the Festival wasn’t just supported by family, but seems to have been very well-received both in the industry and by the general public: all three screenings we attended today were full. One of the main sponsors of the event was the Bridgend-based company Animortal, which had also set up a fascinating exhibition in a side room of some of the models, props and sets from their forthcoming feature Chuck Steel: Night of the Trampires. The light in the room was more than usually tricky for photography, with heavy contrasts and multiple reflections bouncing around between the surfaces of the glass cases, but I did my best to capture a sense of the sheer amount of stuff involved in creating this type of illusion: my extra today is just a small section of an exhibit showing technical aspects of the modelling, and I’ve put a few other photos here, if you’re interested. 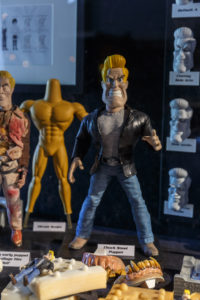 At the end of the day we attended the awards ceremony (which happily was very not like the Oscars), and then were in the process of quietly leaving before the start of the after-Festival party, when L spotted us sneaking out and caught us up for a goodbye hug. At this point one of her colleagues, who happened to be standing at the door, said “Oh! You’re the parents? Well done!”, which made me laugh quite a lot. As I said to R later, we’ve definitely moved from L being our daughter, to us being her oldies.

The winner of both jury prizes was the powerful Mamoon by Ben Steer, which probably won’t appear on line in its entirety until it finishes doing the rounds of the Festivals, but is worth looking out for when it does appear. The audience award went to Our Wonderful Nature – The Common Chameleon by Tomer Eshed, which is wonderfully funny. The student prize went to Samuel Patthey, for his film Travelogue Tel Aviv.