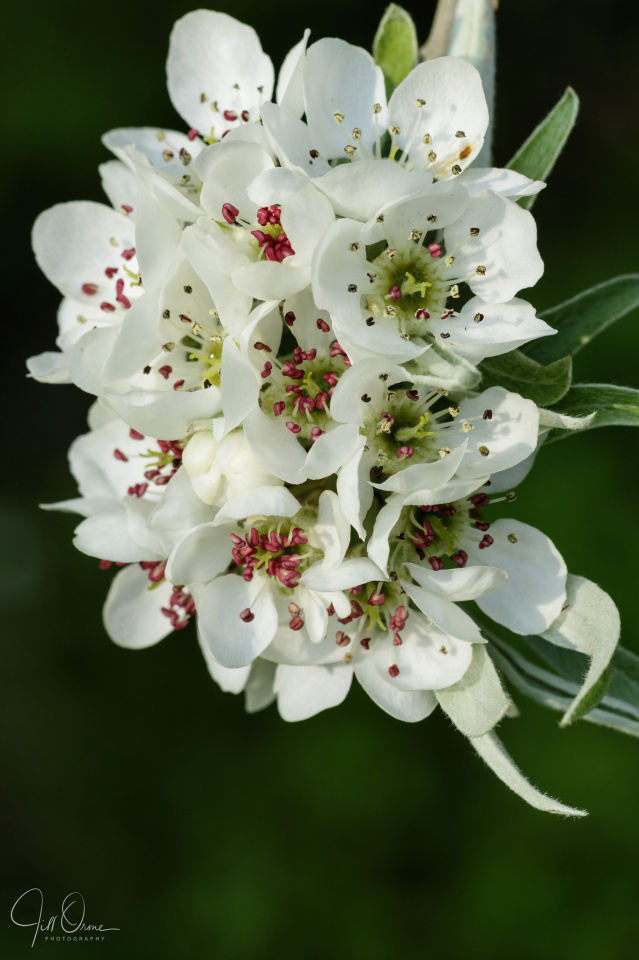 We all have to post the odd blossom photo, right? It’s like, a by-law, or something. I believe that this is actually my fourth of the season, counting yesterday’s bee-on-crab-apple-blossom post, so I’m confident of staying well on the right side of the blossom police.

If you haven’t run across any before, this is pear blossom. We have two pear trees: one a huge old Worcester black pear, going back, I think, to the time when most of this village was laid to orchard; and a weeping ornamental pear, which is quite a weedy, twiggy, annoying thing – except when it briefly produces these lovely flowers. The main advantage of the weeping pear is that it blooms at a suitable height for photography, unlike the black pear, which is also in bloom at the moment, but whose lowest flowers I couldn’t properly reach even when precariously balanced on a large rock.

Bonus fun fact: three black pears appear on the coat of arms of the City of Worcester. The town’s exact connection with the fruit isn’t clear, except that the brewing of perry was traditionally an important industry in the county (and its neighbour Herefordshire), and it’s possible that the black pear was used for this purpose.

Other than one reasonable batch of chutney, I’ve never had any success in using the fruit from our tree, which is dry and hard (leading to its alternative local name of ‘iron pear’); but according to this page, the fault may lie with me rather than the pear. Allegedly the fruit should be stored for three months after picking, and will then be edible – whereas I’ve only ever tried to eat it straight from the tree, and that was a once-in-a-lifetime, never-to-be-repeated experience. Alternatively, the site suggests that you can poach the fruit in red wine, which sounds rather more fun than leaving it sitting around the house from October through to January.

Incidentally, the weeping pear does also produce fruit, but they’re about the size and shape of a rose hip, and the thought of eating one isn’t especially enticing.