As it was a sunny morning, I zoomed off down to Rodborough Common, just south of Stroud, for a butterfly walk. I’d hoped to see some Adonis Blue, which are listed at this site, but couldn’t find any, and I think I probably managed to arrive in the hiatus between the first and second broods. Luckily, making another trip in about a month’s time won’t be any hardship at all, because it’s a wonderful place for a walk, with great views and a good range of insect life. Sadly, many of the inhabitants seem to bite, and I’m now pink and blotchy, and smell strongly of TCP.

I was kneeling down, photographing a Large Skipper, when a pale movement caught my eye, and I turned my head in time to see my first Marbled White of the year waft past. Being very fresh he was, of course, on patrol for females (and for other males entering his territory), but he was also running out of energy, and I didn’t have to chase him for very long before he came to rest and allowed me a few photos. My experience of Marbled Whites is that they like to hang out in long grass, which makes them quite difficult to photograph amid all the clutter, so I was very pleased with the perch that this one chose.

A little later I came across a pair of Common Blues doing a courtship dance, and followed them to rest on a grass stalk, where they proceeded to mate for the next twenty minutes or so. Rodborough Common is quite high, and very windy, and the stalk was blowing around wildly; the Blues were also twisting round and round it, and kept arranging themselves at right angles to each other, so the scene was really quite difficult to photograph. By which I mean that I took several hundred photos, most of which were completely out of focus, and most of the rest had one butterfly in focus and one blurred; the shot I’ve added as an extra today was one of just a handful that I can comfortably describe as adequate. 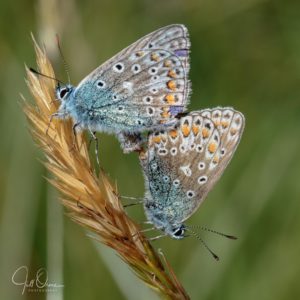 By the time the Blues uncoupled I was very hot and quite tired, and looking forward to getting home for a cup of tea and a sit-down. But as I got back to the National Trust car park where I’d left the car, my eye fell on the ice cream factory over the road, and I had a sudden impulse to try some – very unusually, because if asked I generally say that I don’t like ice cream – and I’m happy to report that it was delicious, and well worth the extra little stroll I took while I was eating it. When I did get home I told R all about Rodborough Common – how attractive it is, what a good place it is for doing lots of steps in a lovely setting, the fact that it has an ice cream factory…. and he’s fully sold on the idea of coming along on my next trip. Which will have the triple benefit for me that I can enjoy his company, take advantage of his bug-spotting skills, and use him as a decoy: whenever R and I are together in the presence of biting insects, they all home in on him, and leave me alone.