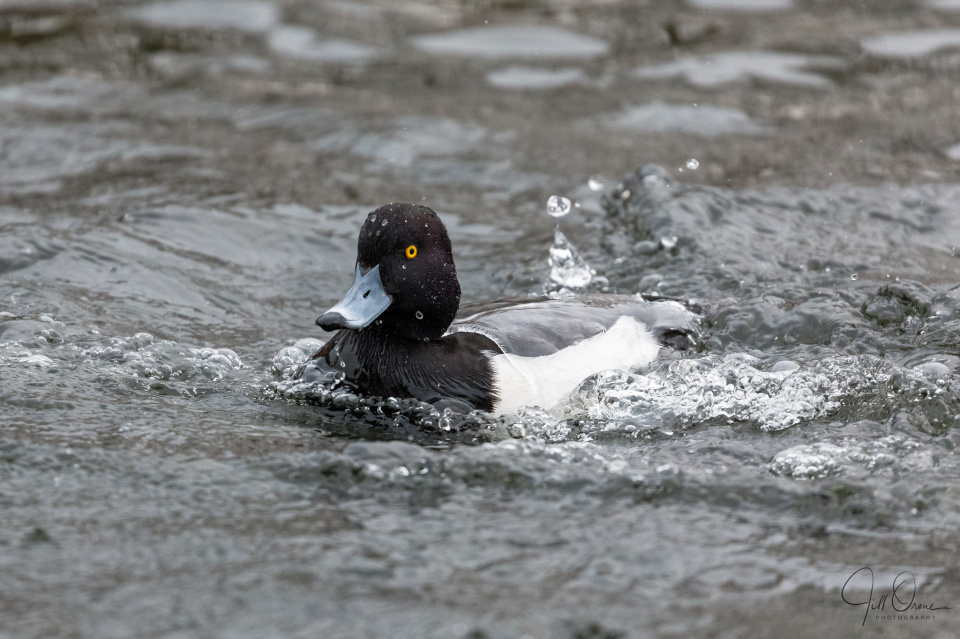 It was pure luck that I caught the exact moment when this tufted duck bobbed back up to the surface of the river – it’s almost impossible to judge where they’re going to surface, because they’re champion divers, and the trail of bubbles they leave as they go under stops several seconds before they come back up again, so it’s a matter of chance if you’re looking in the right place when they do it. I’m still trying to get a really clear shot of one with a mollusc, and today was not my day in that regard, but I’m happy enough with this shot anyway.

R and I went out for lunch today, and walked down to the river en route back to the car in the specific hope of finding some tufties; fortunately R is as charmed by them as I am, so he doesn’t mind standing around for a while just watching them as I take my photos. I’m still not totally sure what it is that attracts me to them so much, but I suppose it’s partly their looks, and partly their demeanour. Compared with mallards they’re rather enigmatic and shy, but they’re also active and inquisitive, and quite determined. I was amused today to see them approach a frenzy of other water fowl that were being fed by someone on the bank – not because they have any interest at all in bread, but just to take a look at what was going on. And despite being the smallest birds in the mêlée, one or two of the males weren’t above having a quick peck at anything else that got too close to them.

It’s a definite highlight of the winter season for me that we have tufted ducks on the river. Come the spring they’ll disperse back to their breeding waters, where they tend to stay very well away from humans and become much harder to photograph.