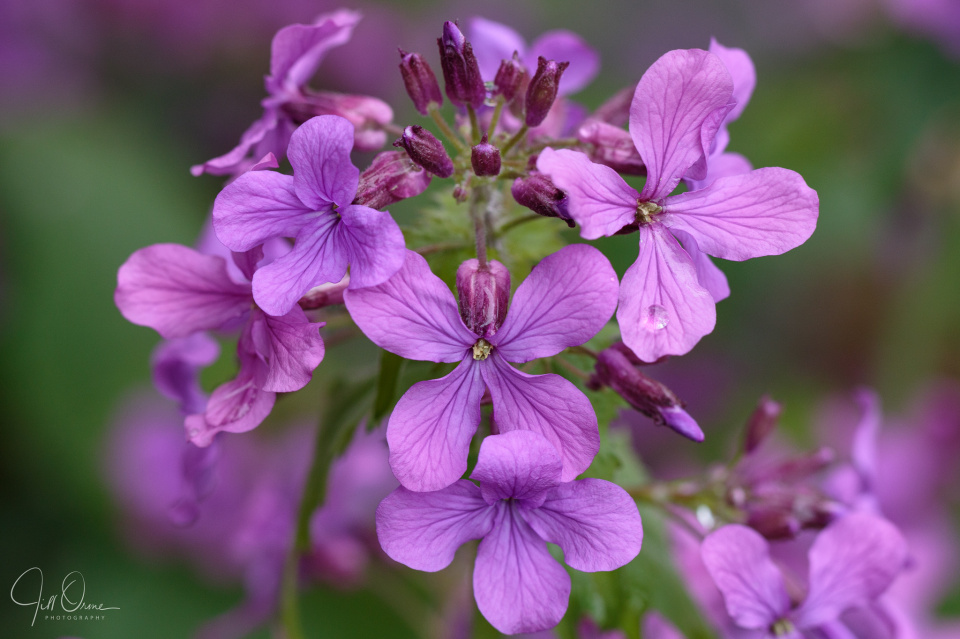 When the rain finally cleared this afternoon I went for a squelch round the garden with the camera. Nothing was looking especially lovely in the murky light, but of the few photos I took this is my favourite.

When we bought this house there were a handful of honesty flowers in one of the borders, but by the following year, to my disappointment, none appeared. The year after that they were back, and I started to suspect that some kind of trickery was afoot, but it was quite a while before I stirred myself enough to look up the plant in a reference book. At this point I discovered that honesty is a biennial, meaning that the seed dropped in any given year takes two growing seasons to produce the next generation of flowers. Over the years we’ve acquired so much of the stuff that the on/off cycle isn’t obvious any more: each spring some will be flowering, though you can’t predict exactly where because it wanders around the garden at will. One of the things I like about it is that it’s prepared to grow in a dark and dry border where almost nothing else is happy, and on a day like today its purple flowers give the gloomier side of the garden a welcome lift.

The nicest thing that happened today was that R posted a recording of a pretty guitar tune he’s written, illustrated by an AV of some of my butterfly photos. If we’re connected on Facebook you’ve probably already seen it – in which case, please accept my apologies for plugging it again – but if not, I’d love it if you’d check it out.