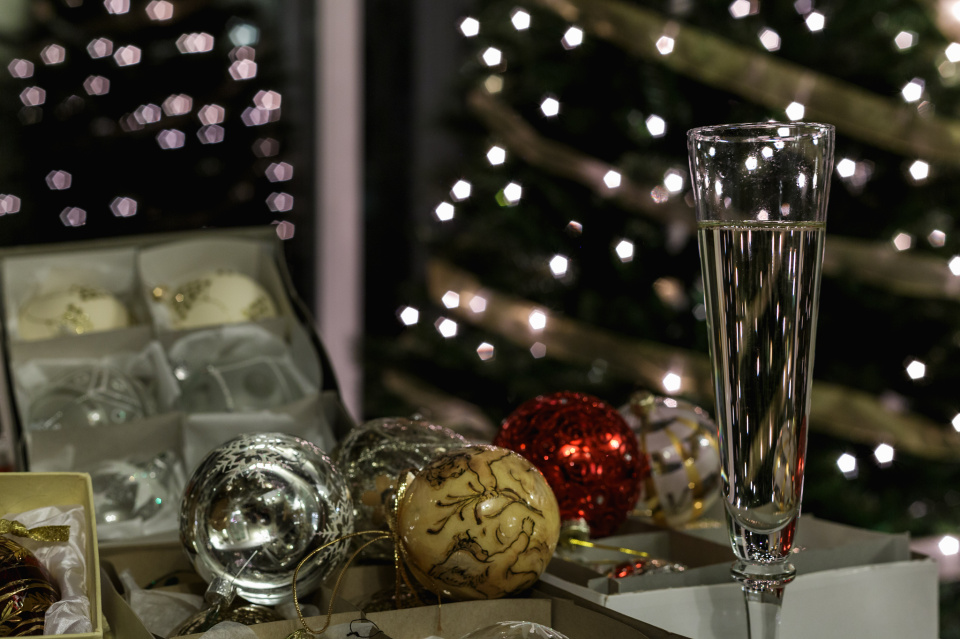 Actually, this isn’t the least festive I have ever felt while trimming a tree. That dubious distinction belongs to 13th December 2007, when I spent part of the evening hanging baubles to take my mind off the fact that R was out with Child One, watching while her car was righted and retrieved from a field by the farmer and a tow truck driver.

Earlier in the evening she had been driving home with her brother after dropping off one of his friends in a nearby village, along a road which (we now know) is a black spot for ice, and yet for reasons of economy is never gritted. Being a relatively new driver, when she hit the ice and the car began to skid she couldn’t control it, and it slid into a banked verge at speed and then flipped over the hedge and landed on its roof. It continued to bounce and roll, and finally ended up in the middle of the field, passenger-side down. It still astonishes me when I tell the story that the sum total of human injury from all of this was a bruised knee – and I rather suspect that Child One acquired that after the car came to rest, when she took off her seat belt and fell into the passenger compartment, landing on Child Two (who I gather was less than amused). His school blazer was rather dirty, from contact with the muddy field after the passenger window broke, but he wasn’t hurt.

By the time they had phoned home and R had sped up to the scene they’d managed to get themselves and their belongings out of the car, so R brought them straight home to me to be plied with hot food and cups of tea – but later father and daughter went back out to meet the tow truck driver, speak to the farmer and watch the recovery process. R’s face when he came back into the house told me that it was probably as well for my peace of mind that I’d stayed home with the Christmas tree – and in fact the following day, when they went to the garage to double-check that nothing important was left in the car, he insisted that I didn’t go because he didn’t want me to see the pile of folded metal that had once been a Nissan Micra.

So this evening, when my current almost total lack of interest in things Christmas combined with the extreme irritation that always attends the positioning of three strings of lights and half a dozen long ribbons and produced a perfect storm of negativity and bad temper, I reminded myself sternly that things could be a whole lot worse. Then, feeling duly braced, I had some fizz, took some photos, and went and watched The Bridge.

I continue to be touched by and grateful for all the sweet things that are being said about Roley’s death – so thank you again. A couple of people have asked me how Arthur is coping, and I must say that I’m becoming a little concerned about him.

He was out in the garden when Roley was put to sleep, and though I let him back into the kitchen afterwards, he showed absolutely no interest in Roley, and seemed oblivious to the fact that he had died. Yesterday he seemed slightly unsettled, but that could easily have been due to the kitchen and snug being in turmoil as the old cooker was removed and the new one delivered. Likewise this morning when he seemed unhappy it could have been because the plumber was here fitting the new cooker, and the entire room was covered with tools, cooker parts and packaging.

By this afternoon though, there was no doubt in either R’s or my mind that he is distressed. He has been round the entire ground floor of the house several times, which is unusual for him, and we think he was looking for Roley. We’ve now dismantled the dog crate which has been in the back of my car for the past few weeks, and after I had brought the old towel that’s been in it into the house for washing he came and sniffed me with great care. And this evening, when R and I were trying to work out how to produce a meal on the new cooker, he lay on the sofa in the snug and intently watched every move that we made – again, very unusual behaviour for a hound who normally appears to be happiest when he’s being left strictly alone. We’re giving him an amount of fuss that would usually have him leaving the room in disgust, and he’s accepting it – but I really don’t know what else we can do. I guess that, like us, he will get used to the new reality sooner or later.