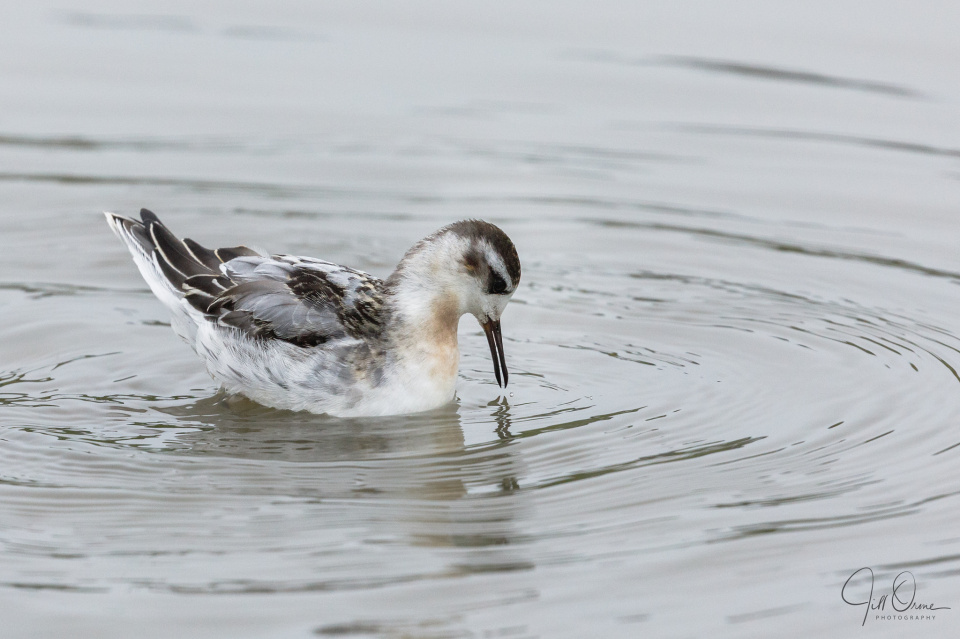 When birders use the word “confiding”, it conveys the charming, though inaccurate, sense that a bird is happy to be in the company of people; what it really means is that the bird is so busy about its own concerns that it has no interest in humans, and can – with care – be approached quite closely. Since the gales of last week there have been numerous reports of juvenile Grey Phalaropes appearing on various stretches of inland water across the Midlands – a rare enough occurrence that even those of us who don’t check our birding alerts every hour have got to hear about it. This pretty – and confiding – little chap has been on the lake at Charlecote since Wednesday, and today was probably the most photographed bird in Warwickshire.

The Grey Phalarope is usually classed as a wader, but again this is slightly misleading: it’s a pelagic bird, meaning that it spends most of its life out at sea, and because of this there are still some things about it that aren’t fully understood. It’s quite widely distributed, breeding in the Arctic from Canada and Alaska (where it’s known as the Red Phalarope because of its bright breeding plumage) through Greenland and Norway to Siberia. Breeding takes place in June, and unusually, once the eggs are laid the females return to sea, leaving the males to incubate them and tend the young. Males and juveniles begin to leave the Arctic in early August.

Grey Phalaropes migrate over the sea: birds that have bred in Siberia and Alaska fly over the western Pacific, and winter off the west coast of South America; birds from Canada, Greenland, and occasionally Iceland fly south over the Atlantic ocean, and mostly winter off the west coast of South Africa; and the few that breed in Northern Europe fly to Africa over the North Sea. Storms in the North Sea and over the Atlantic can sometimes force birds from the latter two groups to land around the coastlines of Europe, but to have so many birds so far inland is the mark of very bad weather indeed.

Like the other Midlands refugees this youngster is feeding and recovering from its ordeal, after which it’s assumed that it will resume its journey – though how it will do this without a flock to guide it, I really don’t know. But it gave every sense today of being fit and healthy, and entirely focused on finding enough food to build up its strength. Grey Phalaropes eat small invertebrates, and are said to spin (usually clockwise) to stir up the water and bring food to the surface. I was a little disappointed that this one didn’t spin in the hour that I was watching it, but it was extremely busy, darting about and repeatedly plunging its head under the water; when it lifted its head its bill would be full of water (and presumably food), and it would open it slightly to allow the water to drain – all the while watching the water intently for more prey. My main image shows part of the feeding process, and the extra is a more descriptive shot of this pretty little bird, which is about the same size as a starling, or maybe a third of the length of a mallard. 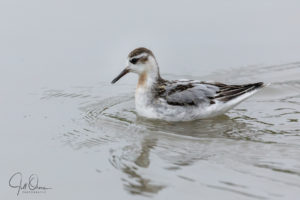 Being someone who likes to take photos of birds doesn’t make me a birder, but I was absolutely wowed by the Grey Phalarope today, and I’m very pleased that I made the effort to go and see it. The thought of its epic journey makes me slightly emotional, and I very much hope that it survives and manages to reunite with its flock.