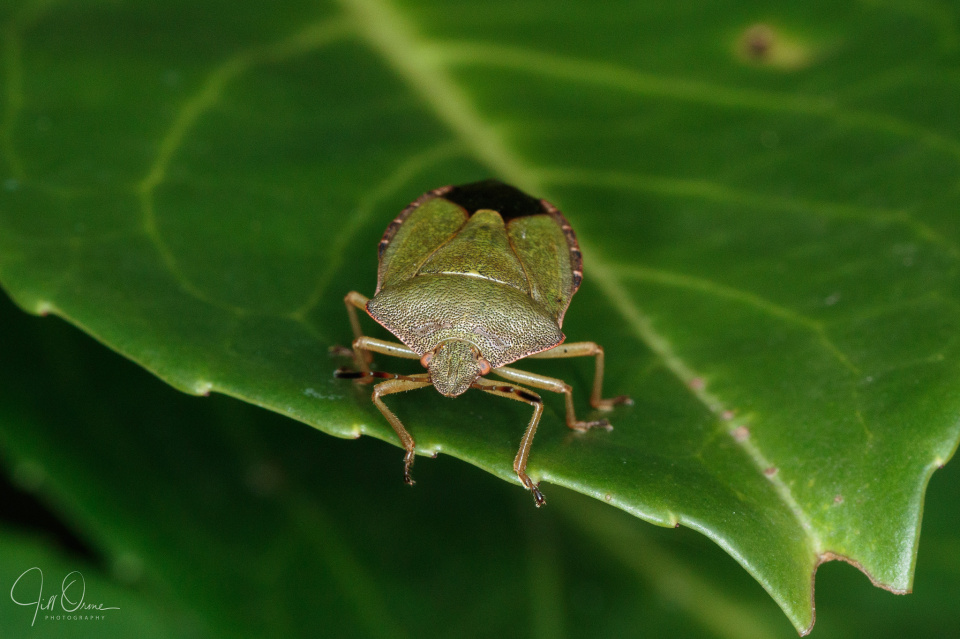 It was a bright sunny morning, and quite warm, but it still took me a good while to track down just a handful of invertebrates. This green shieldbug was sunning itself on the laurel hedge, which is a favourite basking spot throughout the season for many of our resident insects – though I’ve never quite worked out why, because whenever I touch those thick fleshy leaves they feel pretty cold.

Anyway, when the shieldbug saw me it had a bit of a crise de nerfs – which you would too, if you were that far down the food chain – stomped to the edge of the leaf, and lifted its forelegs as if it was about to take off. Then put them down again, presumably because it was still too cold to fly, and sat there just looking pathetic. Because I’m cruel and heartless I closed in and took half a dozen more photos before walking away and leaving it in peace; by my next pass along the hedge, only a couple of minutes later, it had disappeared.

This afternoon R and I zoomed with L and G, H being otherwise engaged. This evening we watched the Welsh BAFTAS (on line on YouTube), for which L’s animation Creepy Pasta Salad was nominated in the Best Short Film category. As I may have mentioned (though probably no more than a few dozen times). It didn’t win, but it bowls me over that my little girl has a BAFTA shortlisting and a Welsh BAFTA nomination under her belt already, while I’m still wondering what I want to be when I grow up. Perhaps I should ask her for some advice.