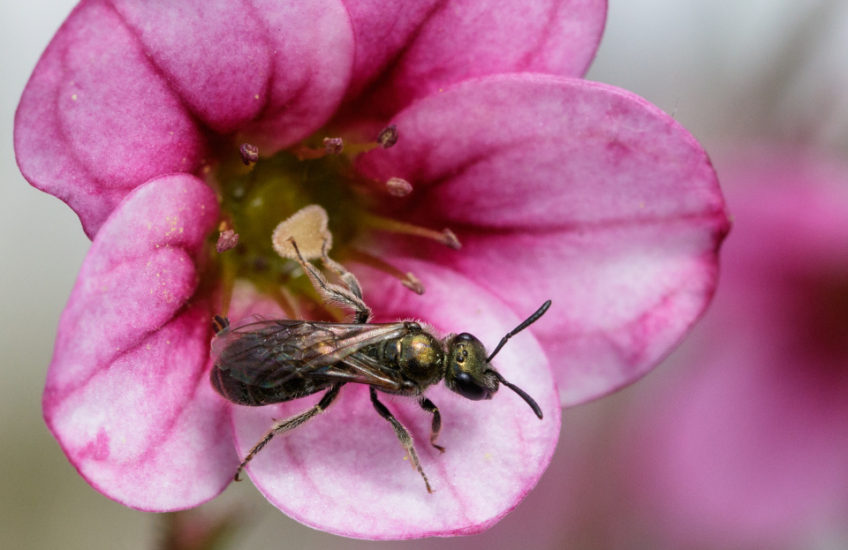 I’m pretty much drowning in photo files at the moment, so today I set myself the task of photographing something interesting without making this situation worse. It was an odd day, weather-wise, which reduced the amount of bug activity in the garden; but I knew that the Saxifrage in one of my sink gardens is beloved of small bees, so I pulled up a garden chair next to the sink and waited. After a few minutes the sun came out and the bugs arrived – but these tiny green Lasioglossum bees (maybe 8mm in length) are very quick and erratic movers, and the flowers were also being blown around quite a bit, so it took a few goes to get a decent shot.

While I was waiting a hoverfly arrived and proved easier to capture: I’ve put in a photo of him as an extra. You can tell he’s male by the fact that his eyes meet in the centre of his head (with most hoverflies the females have a gap between their eyes); his colouring and moon-shaped spots identify him as being a Eupeodes species; and the Hoverfly Master has just confirmed for me that the fact that his spots go all the way to the outer edge of his abdomen means he’s Eupeodes corollae. 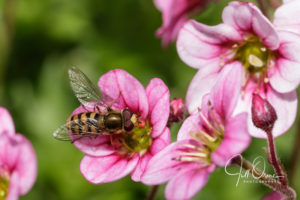 I did manage to hold to my resolve and put the camera down shortly after snapping these two nice bugs – though I couldn’t resist a couple of shots of a honey bee which was apparently so tripped out on poppy nectar that she couldn’t stop collecting the pollen, even though she could barely fly and appeared to have gummed her middle and rear legs together with the stuff.

I also managed to finish my set of Cotswold Lavender Farm photos from yesterday; if you’re interested, the album is here.