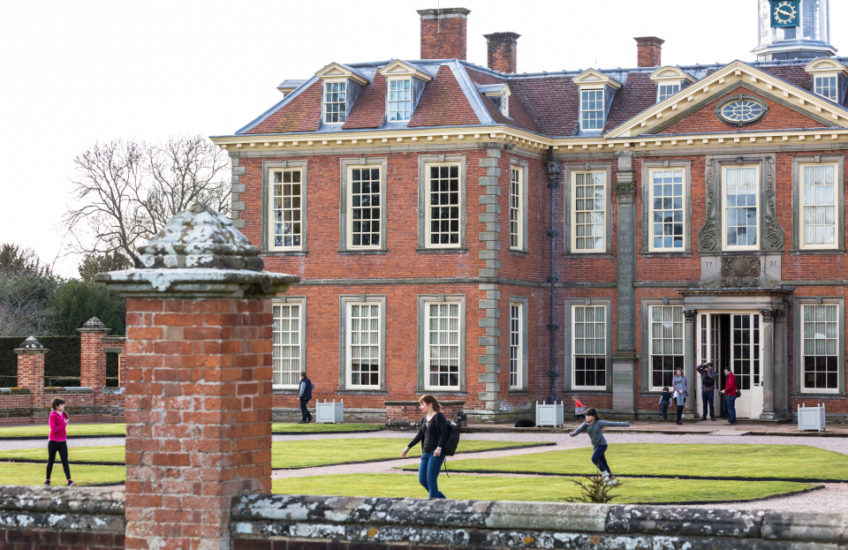 It was such a pleasant day today that I risked casting a clout, and went jacketless when I took Arthur for his morning walk. As we were meandering along I heard a loud buzzing noise, and tracked it to a medium-sized furry bee, scouting for nectar – my first bumble of the year. As I had neither glasses nor a camera with me I couldn’t identify it, but I was happy to see another sign of spring.

After lunch R and I went over to Hanbury Hall. Needless to say it was heaving with people, including several dozen children on some kind of Easter treasure hunt – but it was still very pleasant to wander through the lovely gardens for a couple of hours in the sunshine. Part of my attention was occupied in scouting for shots: before the end of this month I intend to fulfil a homework task set by Emma Davies in A Year With My Camera a few weeks ago by entering the IGPOTY Spring Mono Project competition, and I think there are possible photos to be had at Hanbury, though it was difficult to get clear sight lines today. The weather forecast for the next couple of days is poor, but if we have a reasonable day at the beginning of next week I may pop over early in the morning, before the gardens fill up.

I’m not absolutely sure what I was trying to do with this shot, except that I had a notion that it would be nice to emphasise the fact that this is more a large house than a stately home by including the garden wall. It doesn’t work as well in reality as it did in my head, but it has something I quite like: the angles within it, and the moving figures, give it more energy than a four-square one I took earlier of the frontage. The thing that’s primarily drawing my eye, actually, is state of the lintels over those first-floor windows: I do hope someone is keeping an eye on them, because they look to me like an accident waiting to happen!