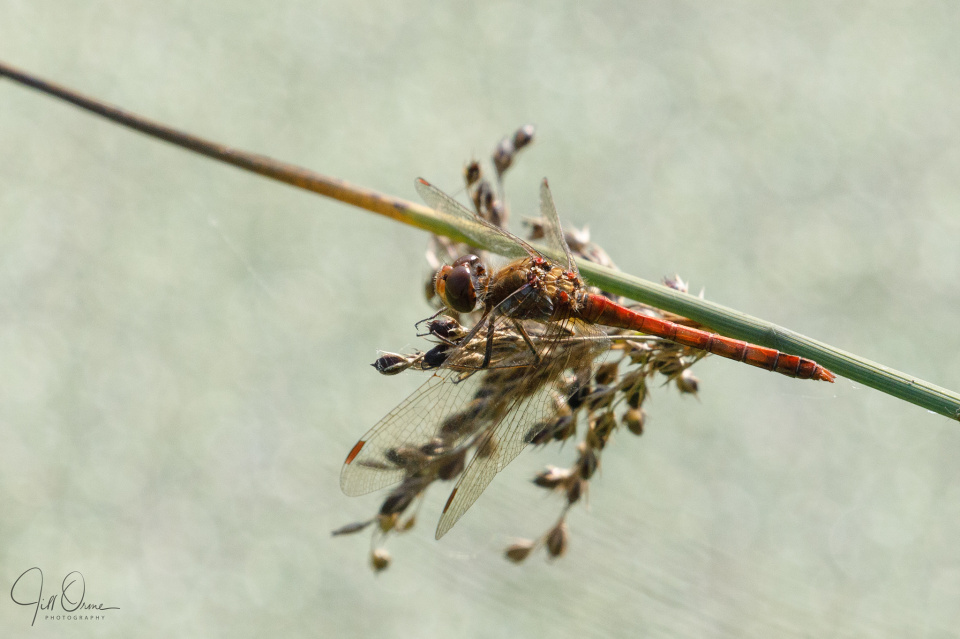 I spent far too long at my desk today, trying to catch up on paperwork that was by now so far beyond ripe that much of it was fermenting and at least one piece was nearing the point of explosion, and feeling grumpy every time I looked out of the window at the lovely day that was happening outside without me. Eventually I decided that I deserved a break (Voiceover: She didn’t actually deserve a break), and cantered round the village with the macro in search of subjects. This netted me very little other than a couple of record shots, and as it was already half way through the afternoon I began to feel twitchy about the lack of a blip photo.

Grove Hill, I thought, would be a reliable place to find some invertebrates, and it has the advantage of being fairly close – so off I zoomed.

It wouldn’t be fair to say that Grove Hill let me down – the problem was really that I got there too late, when the sun was already beginning to drop. But the lower pond had only a male Southern Hawker, furiously patrolling the shrinking area of sunlit water in search of a female, and half a dozen or so Common Darters. I expended a lot of effort and shutter clicks on the Southern Hawker, and almost managed some reasonable photos of him… but not quite. The Darters were a little easier, but I’m beginning to feel that I’ve said everything I have to say about Common Darters for this year, so I was pleased when this male chose an unusual perch. This was the third time he’d landed on the rush, but the first and only time he responded to my silent pleas and came down on the seed head, and he only allowed me two frames before taking off again and disappearing completely – so it’s lucky that this is in focus.

I was wondering about having another crack at the Southern Hawker when a female hove into view, and he immediately grabbed her and made off towards the trees. As I watched their airborne mating wheel fade into the distance, I found that I was less upset about missing a photo opportunity than I was pleased that after all his indefatigable patrolling he’d finally got the girl.