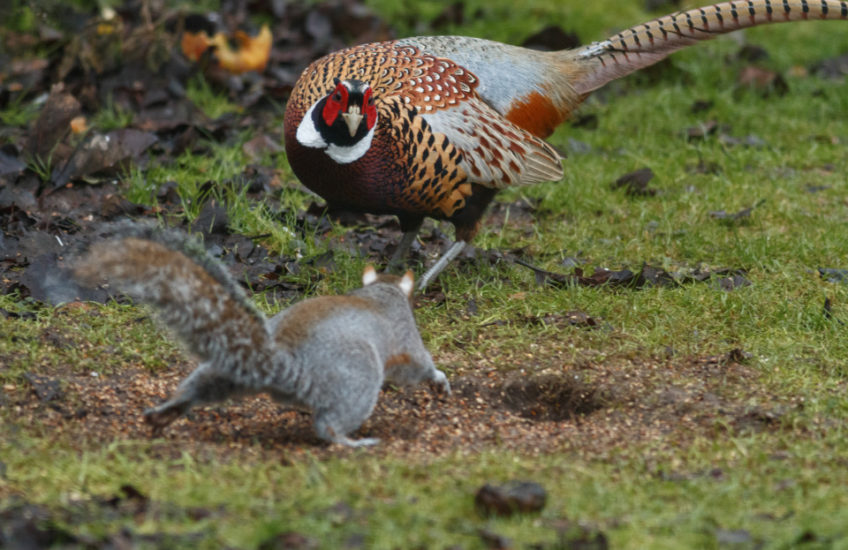 When I came down for breakfast this morning there was a pheasant in the garden, which was a sufficiently unusual sight to send me straight back upstairs for the Big Lens. I didn’t want to open the back door because I knew from past experience that I’d lose my subject immediately if I did, so I went into the conservatory and shot through the glass – which didn’t improve the quality of the images, I have to say. A number of the smaller birds at the feeders spotted me and flew away, and though the pheasant couldn’t work out what had upset them he knew that there must be some danger in the vicinity, and he was nervous and skittish.

Question: why are pheasants so very alert to the possibility of danger when they’re scavenging for food in your garden, and so very nonchalant when they’re standing in the middle of a road and you’re bearing down on them at speed in a car? On the way to Croome yesterday I had to slow almost to a halt and hit the horn a couple of times before a group of three pheasants reluctantly got out of my way.

Anyway, there I was, clicking away, and cursing the light that was necessitating an ISO of 1250, when suddenly a couple of squirrels appeared; and this one, which I think is relatively young, took exception to Mr Pheasant and charged him. To my surprise the pheasant stood his ground, and then made a feint which caused the squirrel to jump back – and thus they went on for a few seconds, circling and feinting, before reaching some kind of tacit agreement that this was getting neither of them anywhere, and going off in opposite directions.

In other news, the supermarket Christmas delivery arrived this morning, and to no-one’s surprise it seems that I may have over-ordered. Again. Fortunately the Offspring are both due home, one tonight and the other tomorrow – so I’ll just have to confiscate their car keys until they’ve eaten it all. After reconstructing the kitchen to make space for all the groceries R and I were a little tired and emotional, so we took ourselves off to Bonds for coffee and cake, and a little look at all the lovely shiny things, and narrowly avoided coming home with an antique chair. I’m not someone who shops for pleasure – as anyone who’s seen the way I dress can attest – but I think I may have reached that bizarre pre-Christmas fugue state where I could absent-mindedly buy pretty much anything I tripped over, and I’m simply not safe with a credit card in my hand.

Luckily, normal service can be expected to resume on Monday.