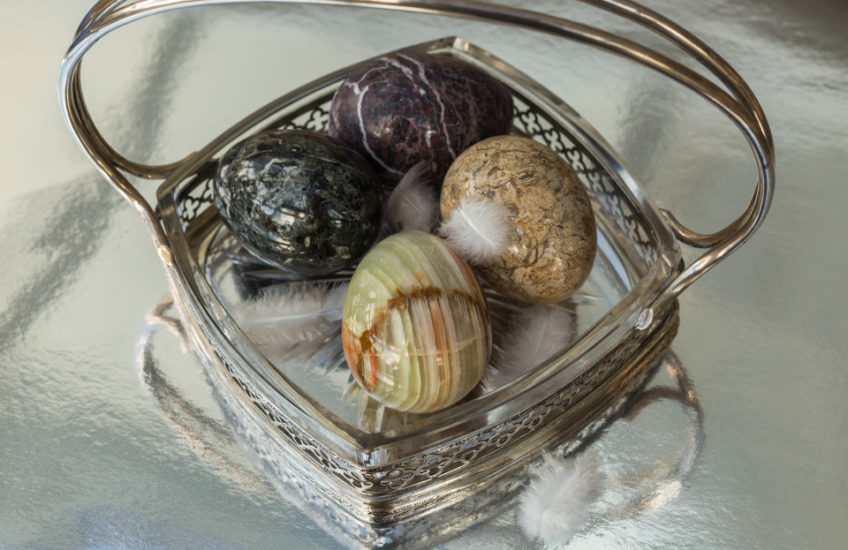 I bought these mineral eggs at the Science Museum when we went to see the Wildlife Photographer of the Year exhibition last summer; no reason, really, I just couldn’t resist them. I’ve been keeping an eye out since then for an abandoned nest that I could put them in, but haven’t found one, and it seemed a bit contrived to build one specially for this photograph – so here they are in a little Viennese Secessionist bonbon dish which is a favourite of mine.

It’s more than possible that chocolate may have been eaten in this house today, but in the form of truffles rather than Easter eggs. My late father worked for a confectionery manufacturer for many years, and I’ve never forgotten his explanation that you could only spin chocolate into hollow shapes by putting a lot of extra fat in it – an idea which I find strangely unenticing. I hope I haven’t put you off too now…

This afternoon I received my daily Twitter roundup email (I know that it’s traditional to get tweets on your phone, but I can barely cope with people texting me about specific things: the very thought of receiving a continuous stream of the random 140-character musings of half the world makes me exhausted); and the first item on it was a tweet from Child One about a project I’ve been bursting to talk about for months, but not doing in case I hexed it in some way. But I guess if she’s broadcasting it herself, it must be safe for me to blog about it now.

For just two days, on the 23rd and 24th April, The Globe Theatre in London will be showing a series of specially produced short films – one for each of Shakespeare’s plays – on giant screens spaced along the South Bank. The project is called The Complete Walk, and it will be a major element in events to mark the 400th anniversary of Shakespeare’s birth. My understanding is that a number of different directors are currently working on these films, as well as just about everyone who is anyone in the world of British stage and screen acting – and Child One has been commissioned to provide a few seconds of animation for each film. Just writing that down I find that I can still hardly believe it, even though I know that she’s absolutely up to her neck in Shakespeare at the moment: this was the photo she tweeted this afternoon. It would be fair to say that her father and I are really quite pleased for her – I think we might have reached the point at which we can stop agonising about whether we should have encouraged her to get a sensible job!

The information about The Complete Walk on the Globe’s web site is still quite sketchy (amusingly, really, as this time next month the whole event will have been and gone), but if you’re interested they put regular updates on their Facebook page.