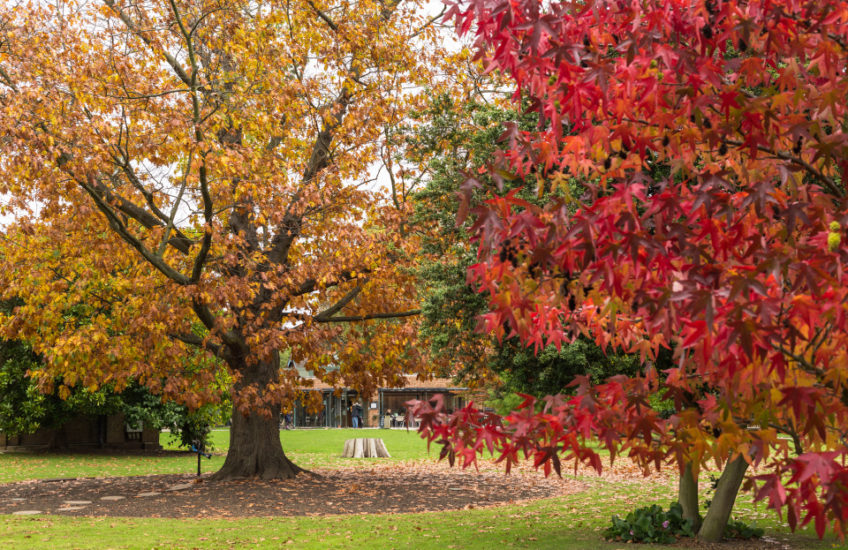 Today R and I went down to London, to see the exhibition “The Amazing World of M. C. Escher” at Dulwich Picture Gallery. This trip was proposed by R, a competent draughtsman himself, who has been a huge fan of Escher’s work for over 40 years – but I also enjoyed the exhibition very much, and recommend it if you should be in the area before it closes on 17th January next year. The gallery, which was opened in 1817 in the grounds of Dulwich College, was the world’s first purpose-built picture gallery, and is a lovely place to see art – as well as the main building, which is charming, it’s set in lawned gardens with mature trees, and has a very nice cafe. As we were leaving I turned to look behind us and saw this view through the autumn leaves of an oak and a maple tree – the building that’s just visible is the cafe, which is separated from the main gallery by a glassed walkway.

Our route to and from Dulwich took us through our old stomping grounds of Battersea, Clapham and Wandsworth, and having lived in Wandsworth Common for so many years it felt very odd to be back there as virtual strangers. On the way home we drove along the edge of the Common and past the end of the road where we used to live – and the changes to it were so dramatically obvious that R couldn’t resist circling the block and coming past what used to be our house, which is now almost swamped by new development on either side. It made us both quite nostalgic, and me actually very sad – I loved being a Londoner, and I still miss it.

On the way down the M40 towards London we had seen a murmuration of starlings forming over the motorway, and I’d hoped that we’d see another on the way home so I could take a photo; but although there were signs of birds gathering in roughly the same area of Oxfordshire, it wasn’t as obvious a flock. There was a great sunset though, and I managed a few shots through the passenger window when the landscape allowed it – this is R’s favourite of those shots, and this is mine.