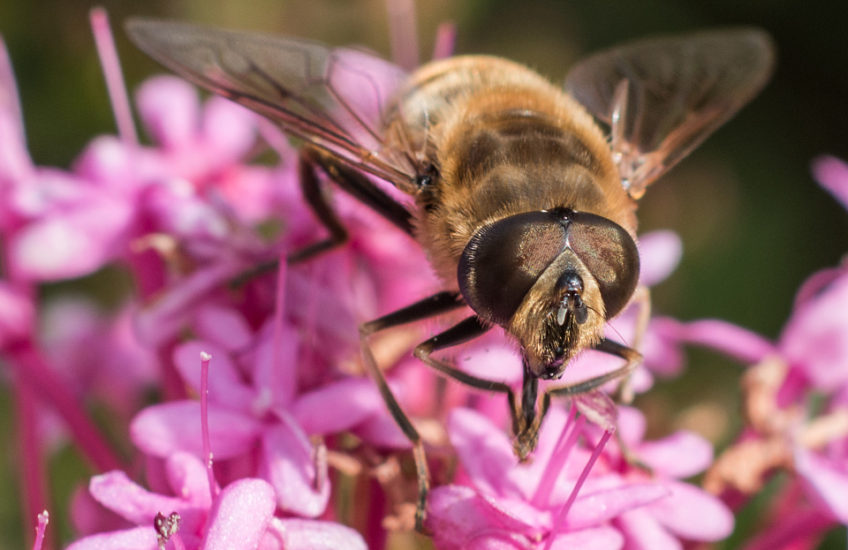 One of the things that most pleases me about my growing interest in macro work is that I notice things that for years would not have caught my attention. I’m also very happy to find that many things that would have caused me to go “Yeeurgh” quite a short time ago are now fascinating. I picked the crab apples from my little tree this morning, and found a tiny snail on one of them – it was only about 5mm long, and I spent quite a while photographing it. This did not make it happy however, and in the end I liberated it onto another plant.

I knew I had a few snail shots in the bag, but really wanted a bug for today, so I set off on a tour of the garden, confident of finding something. To my surprise there was almost nothing about – except a lot of crane flies. Crane flies are still “Yeeurgh”.

Two complete circuits of the back garden (which is over half an acre, and quite wild in parts) didn’t produce anything I wanted to photograph, so I went to have a look out front, and immediately spotted some bees working the toadflax that I’ve allowed to seed among the cultivated plants. I think they were Common Carders – but to be honest it was hard to be certain, because they were moving at an almost frantic pace. I wonder whether with the autumn coming on they’re feeling an instinctive pressure to collect food and complete their reproductive cycle – they certainly seem to be more agitated than they were at the beginning of the summer.

Then I spotted this on the centranthus. To a casual glance he looks like a honey bee, but even before I got close to him, the way he was moving told me he was probably a hoverfly. He was quite casually and slowly wandering over this flower head, feeding and then washing his face before feeding again. I’m confident that he’s a drone fly – these are largish hoverflies, named for their resemblance to drone honey bees. There are several species, but the most common is Eristalis tenax – and given the shape of this one and the dark stripe down his face, I think that’s what he is.

Drone flies are especially common in gardens in the late summer and autumn, and are said to be useful pollinators. They overwinter as adults, and may emerge on warm winter days. They lay their eggs in stagnant water, especially where there is decaying animal matter. The larvae develop under water, while breathing air through a tube which protrudes from the abdomen – they’re called rat-tailed maggots. When they are fully developed they crawl from the water to find a dry, sheltered spot in which to pupate.

I was pleased with this shot because of the focus on his face and eyes, but I took three other photos that I quite like, which I’ve put on Flickr if you’re interested. They were all taken with the 31mm extension tube on the 85mm lens.