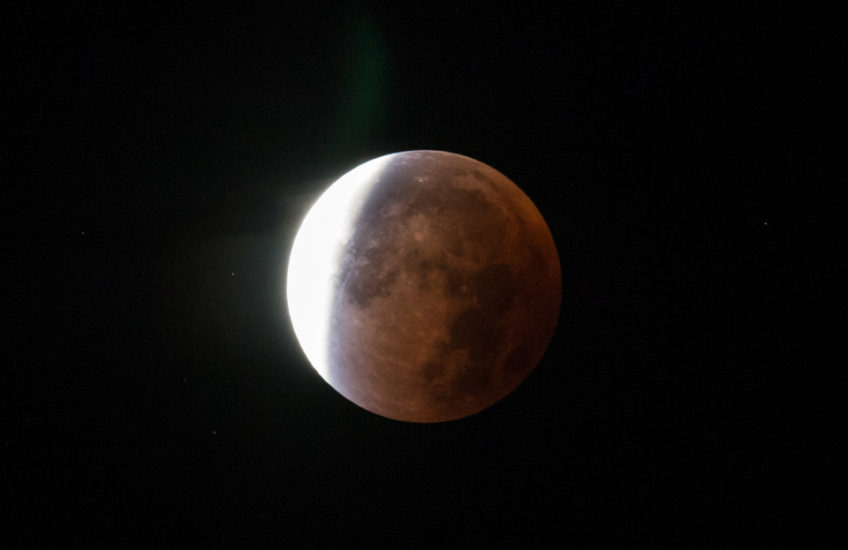 I almost didn’t make my appointment with the lunar eclipse, because (for reasons I haven’t yet established) my alarm didn’t go off. Luckily I always sleep badly when I know I have an alarm set, and I woke myself up at about 3.20am. I checked that the sky was clear, threw on a large, random assortment of clothing, grabbed the camera and went downstairs.

The dogs were not impressed. They each opened an eye, scowled and shuffled irritably in their beds. Or maybe I imagined that.

By the time I had the tripod and camera set up on the patio the eclipse was nearing its deepest, and I hit my next problem – neither I nor the camera could see the moon well enough to focus on it. I took a whole sequence of experimental shots before I managed to get a reasonably clear image – the first one that was good enough to be a keeper was taken at 3.39am, and is the extra today. 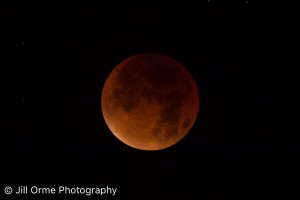 I kept experimenting with different shutter speeds for a while; then my memory card ran out of space, so I went and uploaded what I had and changed the card, and by the time I next glanced out of the window the eclipse was ending. But I thought that this in itself was pretty interesting, so I took another sequence of shots as the sun’s light spread back across the lunar surface. While they don’t have the same end-of-the-world quality as the deep red images of the full eclipse, in some ways I like them better, which is why I’ve featured this one.

Things I have learned from this experience:

1. Try to get to your shooting position before the light disappears, so you can focus the camera!

2. The moon moves a great deal faster than you might think: all my exposures longer than 2 seconds had motion blur.

3. If you’re going to submit one of your images to BBC Breakfast (which I didn’t, by the way) try Photoshopping it into a frankly incredible scene such as right next to a spotlit church spire, because apparently they can’t tell, and they just think you’re a brilliant photographer.

On the subject of BBC Breakfast, they had a guy doing a report from the Exmoor Dark Sky Reserve – which was quite interesting, except that he said (not once, but twice) that the moon was 30,000 times closer than normal. Miles, John – 30,000 miles closer. Not a physicist, I’m guessing – unless he was right and that’s how the guy got the photo of it right next to Warrington church spire…

Irritations aside, and even though I’m somewhat wrecked now, I’m very glad I saw this phenomenon – it was a memorable experience. With a bit of luck I may be around for the next full lunar eclipse in 2033, but I’ll probably need someone else to hold my camera for me by then, so this was probably the only one I’ll ever photograph!