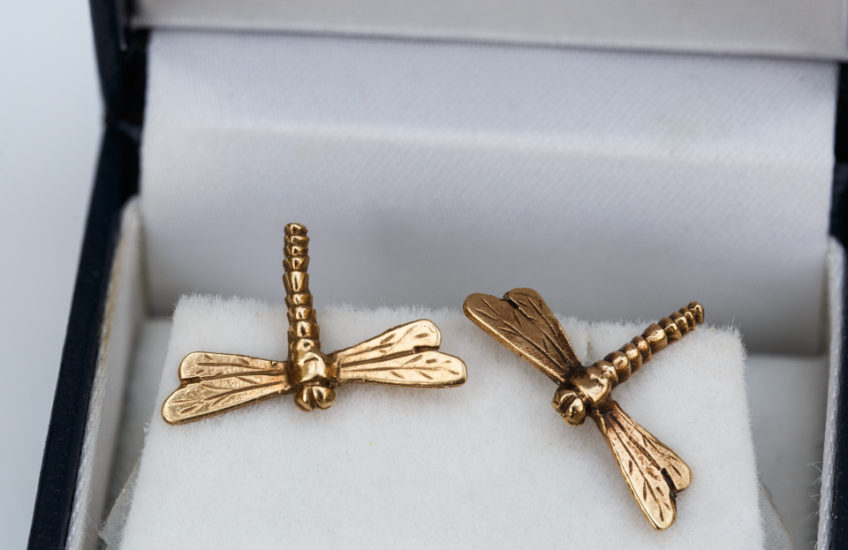 I saw a very sad photo yesterday, of a dragonfly which had half-emerged too early from its larva (the egg having been laid in warmish water) before being killed by the cold. It made me long for the dragon days to return – especially as it was a bleak, dark 2º here today.

These earrings belonged to my mother; when my sister and I were clearing out her things after she died, and each deciding what we would keep, I asked if she would mind me taking them, and happily for me she said no. I especially wanted them because I had encouraged Mum to buy them, in Sheffield in the mid 1970s, at a recently-opened artisan jeweller’s shop. This establishment, which was called Lawrence & Swoboda, sold beautiful and unusual jewellery including hand-made pieces, many containing semi-precious stones such as jade which weren’t commonly seen back then. I still have some pieces that I bought there for myself, and it was always a marvellous place to go in search of presents for friends. The company became wildly successful very quickly, opened a second, larger shop called Elite, nearer the city centre – and then just as rapidly disappeared. A Google search failed to tell me what became of Mr Lawrence, but Glen Swoboda now lives in Scarborough, making furniture and decorative items out of driftwood.

Late this afternoon I zoomed over to Broadway in search of a starling murmuration I’d been told about by a Facebook contact, and found it – though I was some distance away, and couldn’t work out how to get close enough to photograph it. Despite that frustration, it was a strangely emotional experience, standing on a grass verge in the bitter cold, straining my eyes against the gloom of the dusk to see the flock performing its sky dance before settling noisily to roost. A real privilege.